Mohammad Hafeez became the first cricketer to achieve the double of 1,500 runs and 50 wickets in T20 International cricket. Hafeez had taken his 46th wicket in April 2014, but was barred from bowling on numerous occasions, and had struggled to retain his place as a specialist batsman. He took 3 wickets in October last year before being banned again. However, on being cleared, he came back to the T20I side after nine months, and needed two balls to reach the 50-wicket mark when Pakistan were playing Zimbabwe at Harare. Trying to reverse-sweep him Ryan Burl hit to Shoaib Malik at third-man.

Three balls later Hafeez rounded up the innings by clean bowling Blessing Muzarabani. His tally currently stands at 1,665 runs and 51 wickets. Of batsmen who have scored 1,500 runs, nobody else has taken more wickets than Malik (27). On the other hand, of bowlers who have taken 50 wickets, nobody else has scored more runs than Shahid Afridi (1,416). Only five men have done the 1,000 run-50 wicket double in T20Is, as follows: 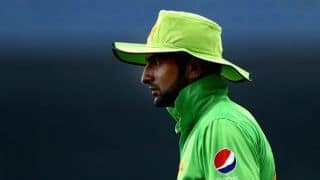