Earlier, Sharjeel Khan and Khalid Latif were both suspended under the PCB s anti-corruption code and sent back from PSL.

Pakistan fast bowler Mohammad Irfan had earlier been acquitted in PSL 2017 spot-fixing row. Irfan has been formally charged and provisionally suspended by Pakistan Cricket Board (PCB) from all formats of cricket with immediate effect for violating its anti-corruption code. On Monday, Irfan appeared before the ACU and admitted through a video statement that the bookies had contacted him during the tournament with four to five offers. Irfan, who recently lost his father, accepted that he was under mental stress. Along with Shahzaib Hasan of Karachi Kings, Irfan was also called to Dubai for further investigation by PCB. However, PCB allowed both Irfan and Shahzaib to play the remaining matches of the tournament. PSL 2017 spot-fixing: PCB summon Mohammad Irfan, Shahzaib Hasan

APCB spokesperson said, Irfan has been charged with two violations of Code Article 2.4.4 and now has 14 days to respond to the Notice of Charge. The corruption code states: Failing to disclose to the PCB Vigilance and Security Department (without unnecessary delay) full details of any approaches or invitations received by the Participant to engage in Corrupt Conduct under this Anti-Corruption Code,” as stated on geo.tv. PCB also sent a press release on Irfan s suspension that mentioned, PCB s investigation will continue with regard to any questionable activity by any player and player support personnel as it carries on with its mission of eliminating the menace of corruption from cricket.

During the national training camp ahead of the West Indies tour, Irfan was ignored for the same. PCB announced a list of 31 probables on Thursday for a week-long camp in Lahore and it did not include the name of Irfan, who has been a certain selection for the ODI and T20I sides, when fit. PSL 2017: PCB vows to issue severe punishments over spot-fixing and corruption

Earlier, Sharjeel Khan and Khalid Latif were both suspended under the PCB s anti-corruption code and sent back from PSL. If the cricketers are found guilty, they could face life ban from international cricket under PCB corruption rules. Nasir Jamshed was also provisionally suspended over allegedly influencing the two players. Jamshed was reportedly arrested in London on Monday but was granted bail until April. 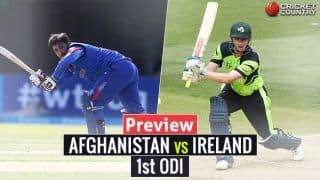 Afghanistan vs Ireland, 1st ODI at Greater Noida: Likely XI for both sides