Mohammad Irfan's fracture seems to have healed and he has started training in Lahore.

Pakistan‘s towering fast bowler Mohammad Irfan might get a chance to play for his team in the ICC World Cup 2015 as medical reports have reportedly indicated that he does not need to get a surgery for his injured hip.

Irfan, whose hairline fracture seems to have healed, has started training at the National Cricket Academy (NCA) in Lahore, where he is still not bowling at full tilt but seems to be enjoying himself being back in action.

According to the Nation, the Pakistan Cricket Board (PCB) will organize a month-long summer camp and the fast bowler would be invited to rebuild his fitness there.

NCA head coach Mohammad Akram said that Irfan is not available immediately for national selection as yet but they have made a plan for the pacer ahead of the 2015 World Cup.

Akram said that they are targeting Pakistan’s ODI clashes against Australia and New Zealand for Irfan later this year to give him the required tempo.

Irfan had to take a break from cricket for a while after his hip got injured during the second T20 international against South Africa in Dubai in November 2013 and returned again during the domestic T20 Cup in Rawalpindi following six weeks of rehab, but only aggravated his injury, which resulted in more fractures to his hip, the report added.

Since then, Irfan has been working with doctors at the NCA on a specialized rehab programme and if the paceman had failed to show enough progress the PCB could have flown him to Australia for surgery, the report further added. 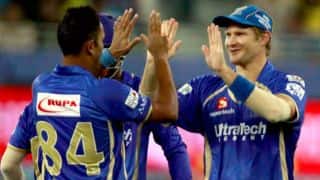