An unbeaten 108 by Mohammad Kaif helped Central Zone recover from a shaky start and post 292 for eight at stumps on the first day of their Duleep Trophy semi-final match against South Zone here Saturday. 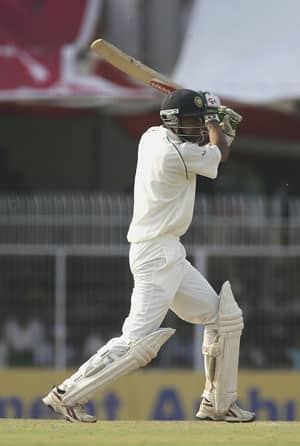 An unbeaten 108 by Mohammad Kaif helped Central Zone recover from a shaky start and post 292 for eight at stumps on the first day of their Duleep Trophy semi-final match against South Zone here Saturday.

It was a patient knock from Kaif, who is also known for scoring freely, as the former India batsman buckled down to play a responsible knock on a pitch that initially assisted the seamers, but rolled out flat and easy paced as the day wore on.

In the event, the South Zone new ball bowlers revelled in the helpful conditions to reduce Central, batting first on winning the toss, to 90 for four just before lunch break.

Thus, it was left to Kaif to carry the Central innings and he did so with aplomb. Along the way, he was assisted by Jalaj Saxena (29) and skipper Piyush Chawla (52), adding 48 and 73 runs for the fifth and sixth wickets, respectively.

As well as Kaif batted, it was Chawla who eventually provided some momentum to the innings during his entertaining innings that last just 54 balls and contained five boundaries and three sixes.

Kaif was in good form as he batted with confidence, especially in the early part of his innings when the pressure was on Central after the loss of a couple of wickets. He was willing to bide his time to play his shots and once into his stride, was quite pleasing to behold.

The South Zone bowlers, barring Stuart Binny who maintained consistent line and length, were rather wayward after their initial spell that fetched them wickets. Once the life ebbed from the pitch, the bowlers were reduced to helpless spectators, but then, were guilty of erring in length.

West Indies-Australia third Test to be played at Dominica