Both Mohamad Nabi and Dawlat Zadran accepted ICC s sanctions and there was no need for a formal hearing.

Afghanistan duo of Mohammad Nabi and Dawlat Zadran have been warned for breaching the ICC Code of Conduct during their team s innings and 72-run win against Ireland in the ICC Intercontinental Cup at Greater Noida. Zadran s action of throwing the ball on Peter Chase s legs, while the batsman was not attempting a run was termed offensive. Zadran as a result now has three demerit points against his name. Nabi on the other hand was charged for breaching the code of “conduct that is contrary to the spirit of the game.” Nabi has been awarded one demerit point for his actions. Both the players accepted ICC s sanctions and there was no need for a formal hearing. Full Cricket Updates: Afghanistan vs Ireland, ICC Intercontinental Cup Match 18, Day 3

Four or more demerit points in a 24-month period will be turned into suspension points. If a player accumulates two demerit points, the player could be banned for one ICC Intercontinental Cup match, two T20Is or two ODIs, whichever comes first. Talking about the above match, Afghanistan thrashed Ireland in just three days and as a result of their huge win, they collected 20 points and went on top of the ICC Intercontinental Cup table with 81 points, just one point ahead of Ireland at 80 points, according to espncricinfo.com. READ: Afghanistan beat Ireland by innings and 172 runs in Intercontinental Cup

Nabi, one of the most senior players in the Afghanistan side, will next play in the Indian Premier League (IPL) for defending champions Sunrisers Hyderabad (SRH). Nabi was purchased for his base price of INR 30 lakhs. His teammate, the 18-year-old leg-spinner Rashid Khan on the other hand was purchased by the same franchise for INR 4 crores. Nabi and Rashid are the only two Afghanistan players purchased in the IPL 2017 auction. 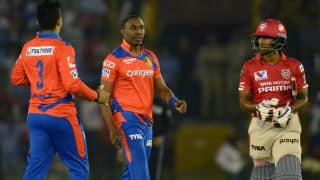 IPL 2017: A throwback to the journey of cash-rich tournament