Nawroz Mangal's 129 was registered against the United Arab Emirates just over a year ago.

During his knock of an unbeaten 131 against Zimbabwe at Sharjah, not only did Mohammad Shahzad help add to his team’s increasing number of One-Day International (ODI) victories, but also laid claim to the highest-ever ODI score by an Afghanistan batsman toppling Nawroz Mangal from the pole position. Mangal’s 129 was registered against the United Arab Emirates (UAE) just over a year ago. The third highest score also belongs to Shahzad who claims the spot for his 118 against Canada at the same venue. There is further statistical proof of Shahzad’s penchant for big scores. Among the 11 hundreds scored in ODIs by Afghanistan batsmen so far, Shahzad is the owner of four. His other hundreds have come against Netherlands and Scotland. LIVE CRICKET SCORECARD: Afghanistan vs Zimbabwe, 2nd ODI at Sharjah

He was the spine of Afghanistan’s effort as they took their second win of the five-match series. Chasing 254 for a win, Afghanistan needed a calm and composed effort as they approached their target. Shahzad ensured he saw Afghanistan complete a successful run chase with a measured knock. He did not look to do anything unnecessary and kept scoring at an efficient rate.

Importantly, he was not even deterred by the fall of wickets in quick succession in the middle overs and was rewarded for his patience with a steady partner in Mirwais Ashraf at No. 8. The Zimbabwean bowlers did not exert enough pressure and were made to pay the price by Shahzad. Shahzad’s 131 came at a strike-rate of almost 100 which makes the knock that much more impressive.

The above table lists the 11 instances of centuries scored by Afghanistan batsmen, sorted in order of most runs scored in the innings. 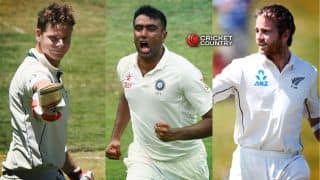