Pakistan's former Test captain Mohammad Yousuf has hit out at the Cricket Board for not letting him play in the ongoing President's Trophy first-class tournament despite domestic performance being a pre-requisite for national selection. Pakistan‘s former Test captain Mohammad Yousuf has hit out at the Cricket Board for not letting him play in the ongoing President’s Trophy first-class tournament despite domestic performance being a pre-requisite for national selection.

The 38-year-old said the PCB had been sitting on a request by the Port Qasim Authority team to allow them to include him in their squad for the President’s Trophy.

“I don’t understand the attitude of the board. On one hand the selectors say I must play in domestic cricket to prove my form and fitness and on other hand the board is not giving me clearance to play in the tournament,” Yousuf said.

The senior batsman has not played for the national team since November 2010 when he appeared in a one-dayer in Abu Dhabi against South Africa.

Since than the selectors have sidelined him for different reasons, primarily form and fitness.

Initially, when the domestic season started some banks had given offers to Yousuf but he declined to play for them insisting he couldn’t do so because of his religious beliefs.

Recently Port Qasim, which is coached by former captain and Yousuf’s teammate Rashid Latif, moved a special request with the board that they be allowed to include him in their squad as a special case.

“I still want to play first-class cricket and I know I am good enough to make a comeback to international cricket. But I am waiting for a response from the board,” he added.

Yousuf, who played 90 Tests, said since 2010 he had not represented any departmental team in domestic cricket.

“But now in these circumstances I want to prove myself and my form to the selectors as I want to play again for Pakistan and end my career with a bang,” he said.

Yousuf’s name was not included in the list provided, before the competition, to the PCB by all the departments taking part in the President’s Cup.

As per the rules a player other than the pre-provided list cannot be included in any outfit in normal circumstances.

A source in the board said Yousuf’s case was under consideration as it was a special one.

“But there are certain rules and regulations we have to adhere to in domestic cricket,” the source said.

“The special permission can only be given by the Executive Coordination Committee of the PCB,” he said.”

But Rashid Latif said what surprised him was that the PCB has not even bothered to respond to the department.

“We had sent the request to the Director-General cricket, Javed Miandad and the board should at least respond and say yes or no,” he said.

“This is not the way to treat a legendary player like Mohammad Yousuf”, Latif said. 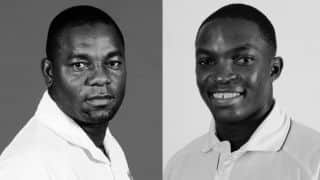