Mohammad Aamer, 22, is serving a five year ban for spot-fixing.

Pakistan‘s banned pacer Mohammad Aamer has ruled out any chances of playing in the ICC World Cup 2015 in Australia and New Zealand.

Aamer, 22, who is serving a five year ban for spot-fixing admitted he didn’t see any realistic chances of playing in the World Cup despite efforts from the Pakistan Cricket Board (PCB) to convince the International Cricket Council (ICC) to reduce the ban and allow him to resume playing cricket later this year.

A three-member sub committee of the ICC is due to meet in October to submit its final report on new anti-corruption laws which could allow Aamer the chance to resume training and play first class cricket before his ban ends officially in September, 2015.

Aamer was banned for five years in early 2011 by the ICC’s anti-corruption tribunal but his ban is counted from the day the ICC suspended him from all cricket in September, 2010 after the spot fixing scandal broke out during Pakistan’s tour to England in Aug, 2010.

“I don’t see myself playing in the World Cup. It is not realistic. Because all these things have to go through a process. I am just grateful to the cricket board for taking up my case. I will be ready whenever I am given the chance to resume training or playing,” the youngster said on Geo Super channel on a talk show.

Aamer also said that more stringent steps were required to curb the menace of spot and match-fixing in world cricket.

“I would suggest to the PCB to appoint a committee of senior players who can be tasked with keeping a watch on young players in domestic cricket and also in the national team and who can groom and educate these players on how to avoid the pitfalls of world cricket,” Aamer said.

He pointed out that if even when he came into the team and started getting seduced by all the glamour, fame and wealth of being a international player, if some seniors had stepped in and stopped him the situation would have been different.

“Seniors can play a big role in educating the new players. But at the end It is also a fact that as a individual one has to be honest with oneself. If you are honest than no one can touch you,” he added.

Amir and former Pakistan captain, Saleem Malik who is also serving a life ban for match fixing also said on the show that they strongly supported the new law being enacted by the New Zealand government which entails a seven year prison sentence for players found guilty of fixing.

“It is a good move by New Zealand because such steps will discourage players from going down the wrong path,” Malik said.

He said he would also like to see the Pakistan government enact similar laws to curb corruption in sports.

“Corruption in any sports is a reality and we need to arm ourselves with the proper legislation to fight this menace which can destroy players and their families and also spoil the image of cricket,” he said.

Amir also agreed insisting that he would also support such stringent measures including prison terms for those found guilty of fixing.

Pakistan have been hit the hardest by fixing scandals with four of their current players including Aamir, Muhammad Asif, former captain, Salman Butt and leg-spinner, Danish Kaneria all banned for fixing in last four years. 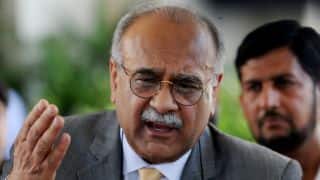