Kolkata: Mohammad Shami grabbed a match haul of seven wickets to help Mohun Bagan beat Bhowanipore Club by 296 runs in India‘s first-ever pink ball four-day match under lights at Eden Gardens on Tuesday. India pacer Shami followed up his five-wicket haul in the first innings with a 2/82, while part-time seamer Vivek Singh was the wrecker-in-chief in the second essay with a 5/32 to bundle out Bhowanipore Club for 199 in 48.3 overs. Mohun Bagan thus won the Cricket Association of Bengal Super League final which was conducted with pink kookaburra ball under lights to get Eden ‘ready’ for India’s proposed first day/night Test against New Zealand in October.

“I’ll prefer pink ball anyday, hope this pink ball match prospers. The best thing is you got to bowl only one session under sun. Then the ball starts doing the talk once the lights are on,” Shami, who was adjudged man of the match, said. “I got reverse swing in the first innings. I think if the condition is dry, the ball will reverse. The seam usually does not remain intact after 40 overs but it’s not the case with the pink ball.”

Resuming the day at 132 for six, Bhowanipore’s innings on the final day lasted less than an hour with Singh cleaning up the tail dismissing Ravikant Singh who edged one behind the stumps. Having recovered from a knee surgery, Shami is eyeing a Test recall in the four-Test West Indies series next month and he said his focus in this match was to get his rhythm back.

“I’m working on getting back my rhythm and wanted to ball long spell. But then I thought of taking a break after 15 overs to give others an opportunity to bowl with the pink ball,” he said. “I now feel the same way I was earlier. The time spent during the injury was worst part of my life. I was along with my wife alone, and was bed ridden for three months, took two months to walk. Then gradually got my fitness back at the NCA.”

Incidentally, Shami has made both his first class debut and Test debut at this venue which saw his career-best nine-wicket haul. “This ground is always special to me, and the pink ball debut has made it even more special,” Shami signed off. 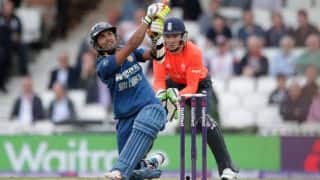