Mohammed Shami was named in the 17-member Bengal squad for the Vijay Hazare Trophy 2015-16.

Kolkata: A fit-again Mohammed Shami, who was under rehab at the National Cricket Academy (NCA) after his knee surgery in May, was named in the 17-member Bengal squad for the Vijay Hazare one-day tournament to be held from December 10-28. Shami, who last played in the India’s World Cup semis against Australia in Sydney on March 26, will be eyeing to make an India comeback in the away-series Down Under in January consisting five ODIs and three T20Is. “I am back after eight months, so I am taking it slow and easy… I am gearing up to play in the Vijay Hazare Trophy. It will be a good preparation going into the limited overs series against Australia,” Shami said. Mohammed Shami spotted training at NCA with rest of Indian squad

The India pacer had a successful World Cup where he took 17 wickets at an average of 17.29 but the injury left him bed-ridden as he underwent surgery in Mumbai on May 5. Such bad was his injury that he was not able to walk for a month as he was walking with crutches but seven months down the line he is fully fit again, bowling full throttle at the Bengaluru-based BCCI’s academy. Mohammed Shami, Mitchell Starc leading race to break 18-year old record

The last season’s semifinalists have been clubbed with Goa, Himachal Pradesh, UP, Madhya Pradesh and Saurashtra in Group D of the List A tournament to be held in Rajkot. The Manoj Tiwary-led side will also be bolstered by the return of Wriddhiman Saha from the national duty as they will open their campaign against Goa on December 10. 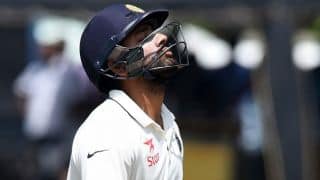