Married to Mohammed Shami since 2014, Hasin has alleged that the bowler is having several extra-marital affairs.

Indian cricketer Mohammed Shami’s wife Hasin Jahan on Wednesday said she will drag the pacer to court for cheating on her. Married to Shami since 2014, Hasin has alleged that the bowler is having several extra-marital affairs.

“Soon after my marriage, I was abused physically and mentally,” Hasin told reporters.

Earlier, in a bid to expose the pacer’s extra-marital affairs, Hasin posted several screenshots of Messenger and Whatsapp messages on her unverified Facebook wall.

Notably the post, which was uploaded from an unverified account, was titled as ‘Shami’s enjoyment’ and had several pictures of the pacer’s text messages to multiple women.

“I’ve done everything he wanted me to do. I left my modeling career, job and also did not step out of the house,” Hasin said.

She further alleged that Shami’s family forced her to marry him and later also tried to kill her.

“He was planning to abandon me after his South Africa tour by taking away the property and insurance papers. I have been tolerating all this for the past five years. He has been asking for divorce for two years,” she said.

Hasin said Shami was only concerned with money and fame.

“I’m not going to divorce him till my last breath. I’ve all evidences against him and will soon drag him to court,” she said.

Shami has rejected the reports of his extra-marital affair, saying that someone is conspiring to ruin his career. 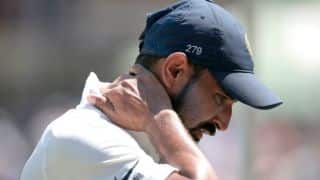