Mohd. Aamer vows to recover from the setback

Mohd. Aamer vows to recover from the setback

Pakistan quick Mohammad Aamer has promised to come back from the "worst day of my life" after receiving a five-year ban from cricket for his part in a spot-fixing scandal. 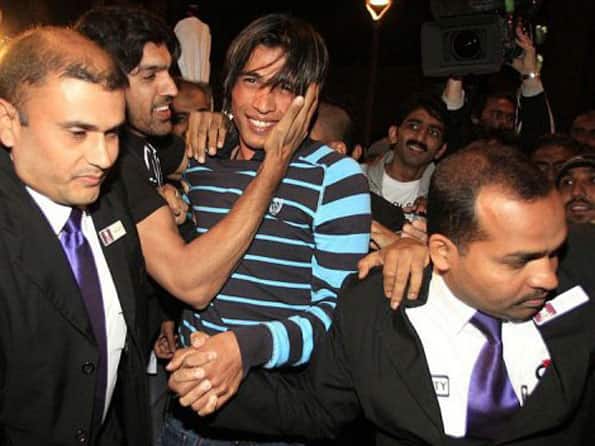 Pakistan quick Mohammad Aamer has promised to come back from the “worst day of my life” after receiving a five-year ban from cricket for his part in a spot-fixing scandal.

An International Cricket Council (ICC) anti-corruption tribunal in Doha on Saturday also handed out longer bans to former Pakistan captain Salman Butt and seamer Mohammad Asif for the roles they played in bowling deliberate no-balls during last year’s Test against England at Lord’s.

Britain’s News of the World tabloid alleged the three cricketers had colluded in a betting scam organised by UK-based agent Mazhar Majeed.

Prior to the scandal, Aamer was regarded as one of the hottest properties in world cricket after the teenage left-arm quick had troubled both Australia and England with some superb displays of swing bowling.

And the thought that at the age of 18 his career might be over was almost too much for Aamer to comprehend.

“What can I say about my feelings?,” Aamer told the BBC on Monday. “When someone is seeing in front of him the end of his future, his career, then that is the worst day of one’s life. Cricket is the most important thing in my life because I left my studies for cricket, I was so passionate about it.”

“My entire family depends on me and I depend upon cricket so the entire thing will be upset by this decision. We (Aamer and his lawyer) have the option to appeal which we will exercise. About the future, I will never lose hope. I have never done that in my life. I firmly believe that in all adversity something good always comes out,” he said.

“I’ll always take it as something which will propel me to do better and I’ll do everything in my power to make a strong comeback.

“I have firm faith that God must have some lessons for me to learn from all of this, like in a player’s career when he has a bad patch, I’ll take it in the same way and I’ll try to work hard, make a comeback, and learn good things out of these bad days.”

Butt too has indicated he wishes to appeal but Asif on Monday was still considering his options, according to a statement issued by his London-based lawyers, Addleshaw Goddard.

“Mohammad Asif has co-operated fully with the International Cricket Council’s (ICC) investigation and is very disappointed and upset by the decision it reached,” the statement said.

“Together with his legal representatives, he is now considering his response and will not be commenting further due to the ongoing criminal proceedings.”

On Friday, British prosecutors charged the three players as well as Majeed with criminal corruption offences and summoned them to appear in a London court on March 17.

The players can appeal against the ICC bans to the Court of Arbitration for Sport in Lausanne, Switzerland.