Pacer Mohammed Shami’s brilliant five-for helped Mohun Bagan take control of the first pink-ball game on Indian soil – the Cricket Association of Bengal’s Super League final – against Bhowanipore at the Eden Gardens here on Sunday. Bagan were firmly placed at 150/4 from 38 overs in their second innings with a lead of 296 runs at stumps on Day 2 of the four-day contest. Arindam who remained unconquered on 49 was the top scorer for Bagan. Vivek Singh with 36 was the other major contributor. For Bhowanipore, Ayan Bhattacharjee pocketed 4/56. BLOG— MB: 150/4, Super League Final, Day-Night Pink ball match, Live Cricket Score, Mohun Bagan vs Bhowanipore Club, Day 2 at Eden Gardens: Stumps

Earlier, Shami created havoc in the Bhowanipore ranks. The right-arm pacer who had to spend almost a year in recuperating from a knee injury looked at ease with the pink Kookaburra in hand.

He finally finished with figures of 5/42 after 13.2 overs as Bhowanipore were skittled out for 133. However, Bhowanipore were awarded 20 penalty runs which helped them notch 153. Uddipan top scored with a 79-ball 41.

A little later speaking to the broadcaster Shami chose the pink ball over its red and white counterparts. “I will prefer bowling with this. Under lights it is moving continuously,” he said.

“When I started bowling, there was moisture which helped me swing the ball. We think it will reverse as well with this ball, though it does not get scuffed up that easily.”

Bagan wicket-keeper Wriddhiman Saha said the ball was easy to pick under the lights because of its bright colour. “Every ball is moving, coming in, going out, you cannot see it happening with a red ball. You have no problems in picking it up because it is really bright.”

Asked if it is assisting spinners too, Wriddhiman said: “May be if it is a rank turner, it will assist them. But not on a pata (flat) wicket.” The curiosity over pink-ball cricket saw around 5,000 fans flocking the stands.

In the first session Bagan could not add a single run too their overnight score of 286/8. But they were awarded 13 penalty runs which helped them get to 299/10. Rajkumar Pal (5) and Sanjib Sanyal (60) were the last two batsmen to fall. 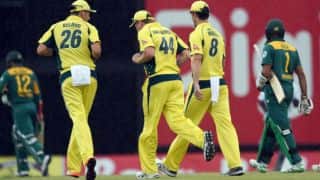