Ajmal was reported for a suspect action after the first Test against Sri Lanka.

Pakistan chief selector and manager Moin Khan has said that some hard and difficult decisions need to be taken for the national cricket team before the ICC World Cup 2015 early next year.

Talking to reporters at the National Stadium today after meeting with the Chairman of the Pakistan Cricket Board (PCB), Moin said the shoddy performance of the team on the recent tour of Sri Lanka had affected the World Cup preparations. “Yes we didn’t perform up to expectations and when you lose like this it affects the morale and confidence of a team. It was the first tour for the new head coach Waqar Younis and his coaching staff and now I think he is in a better position to judge every player himself,” Moin said.

The former Pakistan captain said that the selectors would soon sit down to discuss the future. Dropping a clear hint that some players might face the axe, Moin said that the selectors will decide what is best for the team and all decisions will be unbiased. “We need to now regroup for the World Cup and we need to assess our requirements and performances of each player,” said Khan.

Asked if he thought a change in captaincy would bring about any improvement and whether he had given any feedback to this to PCB chairman, Moin said the captaincy was not the domain of the selectors. “This is something for the board to decide but obviously if a discussion is held on this issue all stakeholders will give their views on it. But it is after a long time that Misbah-ul-Haq didn’t get runs in a series otherwise he has been playing the role of an anchor in the batting for long now. I think Misbah not scoring runs also had an effect on the team?s performances which is not surprising given his track record.”

Moin was also candid on the issue of Saeed Ajmal and said the selectors were prepared for the worst. “The team coaches and selectors have already started work on any eventuality. We have shortlisted some spinners and called them to the national cricket academy to have a look at them. Because incase Saeed is stopped from bowling or restrictions placed on him by the ICC we have to find suitable replacements,” he said.

Ajmal, 36, who has been the top spinner for Pakistan and in world cricket in the last two or three years was reported for a suspect action by match officials after the first Test against Sri Lanka last month in Galle. He was sent to Brisbane to undergo tests at the ICC accredited biomechanics facility and the ICC is expected to announce its findings in a week’s time from now. 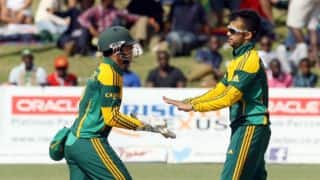