Due to rain, the play started late after Bangladesh had won the toss and elected to bat first.

A gutsy partnership between Mahmudullah and Mosaddek Hossain managed to take Bangladesh to 158 for 8 in the first T20I at R Premadasa Stadium, Colombo. Due to rain, the play started late after Bangladesh had won the toss and elected to bat first. But before that, during toss, Bangladesh skipper Mashrafe Mortaza announced that he will retire from T20 Internationals at the end of the ongoing series. He also released a statement on his Facebook page, thanking all his teammates and fans. Mortaza, however, will continue playing ODI for Bangladesh and will lead his side in the upcoming Champions Trophy. Once the match started, it was Sri Lanka, who struck first. Full Cricket Scorecard: Bangladesh vs Sri Lanka 1st T20I at Colombo (RPS)

Tamim Iqbal s middle-stump went for a walk after he failed to read Lasith Malinga. Tamim was dismissed off the second ball of the innings for a duck. Malinga had a chance to dismiss Soumya Sarkar off the first ball he faced as well, but he failed to hold on to a catch off his own bowling. The second-wicket stand between Sabbir Rahman and Sarkar was a much-needed one as it gave the Bangladesh innings some stability. They put on 57 in just under 5 overs before Sabbir was run out thanks to a direct hit from Seekkuge Prasanna for 16; four balls later, a well-set Sarkar holed out in the deep for 29 off 20. Live Cricket Updates, Bangladesh vs Sri Lanka, 1st T20I at Colombo

Mushfiqur Rahim and Shakib Al Hasan were the new batsmen at the crease. If anyone could get Bangladesh to a good score, it had to be them. But Mushfiqur played a rash shot to get himself bowled; Prasanna got rid of Shakib soon afterwards. Mosaddek Hossain and Mahmudullah then joined hands, playing sensibly and not throwing their wickets away. They kept their wickets intact and started to attack with 5 overs remaining. They brought up their 50-run stand off 38 deliveries and were eyeing a score close to 160 with a little over two overs to go.

However, Malinga removed Malinga Mahmudullah with the first ball of the 19th over for 21 off 26 to give Sri Lanka a chance of restricting Bangladesh to below 155. In the end, Bangladesh just managed to get over 150. Their bowlers have to bowl really well to restrict this Sri Lankan batting line-up. 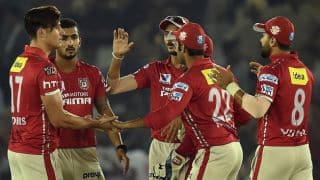