Afghanistan pulled off a two-wicket victory against Bangladesh on Wednesday to level the series, after losing a thrilling opening match days earlier by seven runs.

Bangladesh on Thursday recalled left-arm spinner Mosharraf Hossain for the crucial final one-day international (ODI) against Afghanistan as they seek to clinch the series locked at 1-1. Afghanistan pulled off a two-wicket victory against Bangladesh on Wednesday to level the series, after losing a thrilling opening match days earlier by seven runs. Mosharraf, who played the last of his three three ODIs back in 2008, replaces pace bowler Rubel Hossain for the decider on Saturday in Dhaka. “We have seen Afghanistan were struggling to play spin bowling in the first two matches. So we’ve decided to include Mosharraf for the third match,” said chief selector Minhajul Abedin.

Rubel, who returned to the side after a long injury lay-off, conceded 62 runs in nine overs for one wicket in the first match and was given just three overs in the second one. Afghanistan have proved tenacious opponents against the more fancied Bangladesh. The Afghanistan series was hastily arranged to give Bangladesh some cricket ahead of a more serious engagement against England in October.

So far, the competition has been evenly poised with the ODI series leveled between both sides. In the previous match, Afghanistan emerged as winners by mere two wickets, thanks to the heroics of Mohammad Nabi. He not was excellent with the ball but also scored 49 off 61 deliveries to help Afghanistan level the series. ALSO READ: Mosharraf Hossain says he is victim of circumstances in Bangladesh Premier League match-fixing scandal

Nabi put up a partnership of 107 runs off 145 deliveries for the fifth wicket, which was the turning point of the match. Captain Asghar Stanikzai scored 57 off 95 deliveries to support his team in the middle overs. 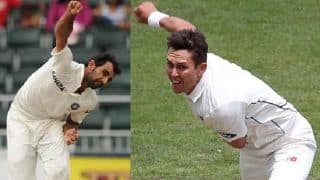