The 2016 edition of Indian Premier League (IPL) witnessed batsmen going throttle and obliterating the bowlers. All the same, it was quite the opposite in 2017, as the bowlers eclipsed the best of batsmen and collected a few records. Bhuvneshwar Kumar, pace spearhead of Sunrisers Hyderabad (SRH), displayed an encore of his last year’s performance. Once again, he topped the chart of leading wicket-takers in the season and became the first bowler to win Purple Cap consecutive times.

In addition, a plenty of new faces burst into the scenes and impressed all and sundry. Young Indian bowlers such as Basil Thampi, Mohammad Siraj, Siddarth Kaul, Shardul Thakur, Washington Sundar, Aniket Choudhary, Rahul Tewatia, et al did a remarkable job and honed their skills by rubbing off their shoulders with the veterans. However, these bowlers did not feature in the top 10 but made headlines with their spirited efforts.

Bowlers such as Thampi, Siraj, and Kaul proved that India’s fast-bowling department has a bright future. With a perfect amalgamation of yorkers and variation in pace, they can brave the elements with their swashbuckling bowling skills. On the other hand, Thakur and Choudhary moved one level ahead, while teenager Sundar and leg-spinner Tewatia did their best in whatever the chances they were offered.

Besides Indian bowlers, there was an Afghanistani spinner who trapped batsmen in the maze with his spin wizardry even Rohit Sharma appeared clueless against his array of spin. Rashid Khan, the first ever Afghan to feature in IPL, did an exceptional job by mixing up his leg-break, sliders and wrong ‘uns.

Baroda pacer Jaydev Unadkat emerged as the most improved in this season. Scalping 24 wickets in 12 matches, he rose to his best with a hat-trick as well as a 5-wicket haul. To credit him, it took him as many as 10 years to attain the excellence he was expected of. His main strength was to mix pace and length, which made him the vital cog of Rising Pune Supergiant (RPS) who eventually lost in the final to Mumbai Indians (MI).

MI s Jasprit Bumrah overshadowed Lasith Malinga by ending as the highest wicket-taker for his team and was well supported by Mitchell McClenaghan. This season of IPL also saw the rise of Sandeep Sharma, who tamed big players such as Chris Gayle, AB de Villiers, among others with his swing-bowling.

Come to think of it, the IPL 10 was significantly dominated by bowlers as compared to batsmen. Hence, it is safe to say that it was the season of bowlers amidst a batsman-dominating era. 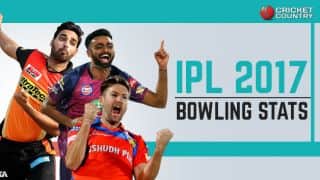