Earlier, Sachin Tendulkar had heaped praises for the 15-year-old schoolboy.

New Delhi: India’s limited-overs skipper, MS Dhoni on Tuesday paid tribute to Mumbai teenager Pranav Dhanawade, saying that it was not a joke to score so many runs. Speaking on the eve of India’s departure for the Australia tour, Dhoni said, “It’s not a joke to score so many runs. It is serious business in any conditions and ground keeping in mind the age. It’s tremendous, it is important to improve. He must be a very special kid. I would have gotten bored. He’s calculating his batting. It is something that is very rare.” Middle order batsman Ajinkya Rahane also heaped praise for Dhanawade, saying that his knock was massive and hoped that he would play for India some day. READ: Pranav Dhanawade: A thousand splendid runs

“It’s a massive feat to do this. He has started well. 1009 runs take long to say it but to achieve an individual score like this is a big achievement. I hope he plays with us someday. He should just focus on doing well,” he said.

Earlier, legendary cricketer Sachin Tendulkar had also praised Dhanawad for becoming the first cricketer in the world to score 1000 runs in one innings. The master-blaster appreciated the 15-year-old boy for his achievement and called on him to work harder in order to reach new heights.

Earlier, the Mumbai teenager created history as he smashed 127 boundaries and 59 sixes to reach an unbeaten knock of 1009 during his side’s KC Gandhi School two-day match against Arya Gurukul School.

Pranav’s brilliant performance helped his side to declare the innings on 1465, while the opposition side were bundled out for 31 yesterday. Extending their tribute to Dhanawade, the Maharashtra Government had announced to look after the education and coaching expenses of the wonderboy. READ: Pranav Dhanawade congratulated by Sachin Tendulkar, Harbhajan Singh 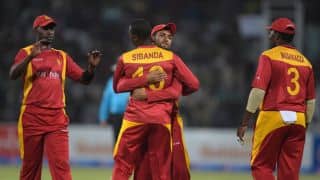