For the second time in a row, Chennai snatched victory from jaws of defeat as they defeated Kolkata by 5 wickets in Match 6 of the Indian T20 League 2018. Chasing a mammoth target of 203, Chennai received the required boost from opener Shane Watson who slammed quickfire 19-ball 42. Ambati Rayudu ably supported Watson with his 26-ball 39 knock, with the duo adding 75 runs for opening partnership. Once the top-order was cleaned up, young Sam Billings anchored the innings in the middle.

Although there was quite a lot expected from skipper MS Dhoni but it was Billings who paid it off for Chennai. With Dhoni seen struggling with spinners, he allowed the young Englishman to take over. Billings scored his third fifty in Indian T20 league. The first two came for Delhi in 2016 and 2017. Billings match-winning 23-ball 56 saw Chennai sail home.

In the post-match chat with Watson in the dugout, Billings spoke about his experience playing in Chennai, his bond with Dhoni and the warm reception the players received from the Chennai crowd.

On MS Dhoni, the captain: “It comes down to one bloke who sets the tempo. Dhoni has been fantastic. He allows people to play the way they want to. A huge thanks to him and of course, Stephen Fleming as well. We have got great bunch of people in the dressing and a hell of a side.”

Sam Billings dedicates his knock to the Chennai crowd: “It feels amazing to contribute to win. I put up a show for the crowd. It was great to see almost 10,000 people show up for the match. It shows how much cricket means to the people here. To put up show and win at home after two years is extra special.”

On Chennai wicket: “It was good wicket. It turned a little that assisted the spinners. Ravindra Jadeja was exceptional.” 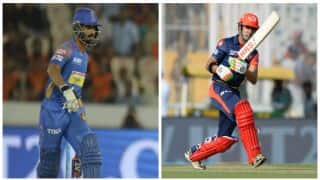