New Delhi: South Africa fast bowler Anrich Nortje recalled bowling to Chennai Super Kings (CSK) skipper Mahendra Singh Dhoni for the first time during the 2010 Champions League hosted by South Africa and thought that he didn’t know how to bat. Dhoni was not known for using his feet too much while batting and that made Nortje believe that he was not someone who knew how to bat.

“I actually think that everyone was trying to block everything… they were just trying to get their eye in at the start I think,” Anrich Nortje added.

Dhoni’s Chennai Super Kings won the second instalment of the 2010 edition of the Champions League T20.

Before making a mark in the Indian Premier League (IPL) Nortje’s first real taste of the cash-rich Indian league came with the CSK unit as a net bowler. The South African seamer is now a known face at the international level and has been a vital cog in the Delhi Capitals set up playing under Shreyas Iyer. Nortje was also one of the leading wicket-takers for the Delhi Capitals in the last season of the IPL. He took 22 wickets in 16 matches. 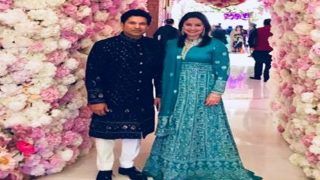 When Anjali Tendulkar Forgot About Her Mom At Airport, Ran After Sachin Tendulkar