England cricketers were booed by a majority of the 24,000-strong crowd, most notably Moeen Ali.

In no mood to be drawn into a controversy at the end of an exhausting tour, Indian skipper Mahendra Singh Dhoni steered clear of queries on England‘s cricketers, especially spinner Moeen Ali, getting booed on home turf during the one-off Twenty20 match here.

India’s tour of England drew to a close on a rather disappointing note with the team losing the Twenty20 match by three runs here. This came after Indians rebounded from the Test series loss to clinch the ODIs with dominating performances.

During yesterday’s match, England cricketers were incessantly booed by a majority of the 24,000-strong crowd, most notably Ali, who had interestingly sought more support from home fans ahead of the match. Birmingham has a sizeable Indian population.

When asked about the booing, England skipper Eoin Morgan laughed it off, saying, “We all got booed.”

However Dhoni equated it with the booing of Indian all-rounder Ravindra Jadeja during the Test series after his infamous altercation with James Anderson.

“Did you ever ask about Jadeja getting booed?,” Dhoni said at the post-match press conference. ” [On] the last day of the tour, I don’t want to start another controversy,” he added. 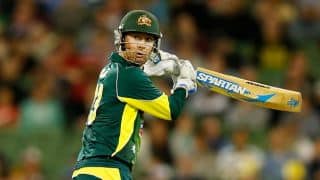