Dhoni perhaps misjudged the bounce that a bowler can generate at the WACA.

India captain Mahendra Singh Dhoni was on Friday hit on the helmet off James Anderson, during the 43rd over of his side’s first innings, in their crucial sixth One-Day International (ODI) against England at Perth.

Dhoni, who was batting on 16, came forward to play a delivery off Anderson, which was in line of the off-stump. However, the Indian captain perhaps misjudged the bounce that a bowler can generate at the Western Australian Cricket Association Ground (WACA) in Perth, as the ball rammed into the crest of his helmet.

Dhoni was visibly not hurt, as he took off the helmet and had a wide grin after being hit, which gave the signal that the Indian captain was all right. Nevertheless, the scene for India deteriorated soon as Dhoni departed later in the over, which once again opened the floodgates.

During the first Test of the Border-Gavaskar Trophy 2014-15, India’s star batsman Virat Kohli was hit on the same spot by Australia tearaway pacer Mitchell Johnson, which shook all the fielders and even the Indian batsman at Adelaide.

According to AFP, bowling bouncers has become a sensitive issue following the death of Australian Test batsman Phillip Hughes, after he was fatally struck in the head by a short-pitched delivery in a domestic game in November 2014. With emotions still raw, there was immediate concern as Kohli ducked into the path of Johnson’s menacing rising ball, which thudded into the front of his helmet. Fortunately, all was well and Kohli went on to score a fighting 115 in India’s 369 for five at the close of the third day’s play. 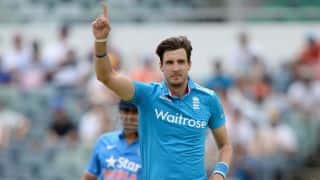