After a fielding-only drill, the Indian cricket team returned to the grind today with an intense net session here, continuing their build-up towards the ODI-leg of their Australian tour.

The Men in Blue will take on the hosts in their first match of the tri-series on Saturday and ahead of this opening clash, MS Dhoni is under the spotlight as he returned to the arena where he announced a shock Test retirement last month.He has remained with the squad here, travelling and even showing up in the Sydney nets but he has not spoken a word about his surprising decision. Keeping wickets and leading the side in all formats for so long took toll on his body and his desire for rest is understandable. It is, however, the manner in which he did so that continues to be baffling. There aren’t many instances of high profile players announcing their exits in such a manner, least of all Indian captains retiring in the middle of an ongoing Test series, let alone on foreign soil.

The lack of communication from the player to the outside world perhaps adds to the astonishment value herein. During the launch of the new ODI jersey for the team, he wasn’t asked by the ceremony’s emcee about his Test retirement, neither were the gathered reporters allowed to ask any questions.

“I am rested,” was all that Dhoni said.

There is no change in his demeanour in training though. He observed the initial proceedings along with coach Duncan Fletcher, before bowling seam-up to the batsmen as he has been doing since the day he landed in Adelaide. Then he batted, taking strike against spinners and fast bowlers, bringing out the big shots and practicing hitting-out against the short deliveries respectively. Everything seemed routine, as if the Test retirement had never come around. There were a few stand-out pointers today. The first one perhaps reflecting a change in thinking for the team management as coach Duncan Fletcher gave catching practice to Suresh Raina, Ajinkya Rahane and Ishant Sharma, the three standing in that order at slips.

To his credit the lanky medium-pacer caught quite a few, even putting in a couple of diving efforts much to the elation of Fletcher. He isn’t a particularly good fielder and by standing in the slips, he could free up an otherwise better outfielder. It remains to be seen if this new fielding cordon is deployed by Dhoni in matches though.Second and more importantly, Rohit Sharma batted with Shikhar Dhawan and Virat Kohli took third strike. Only then did Ajinkya Rahane pad up.Net-practice is hardly any official confirmation but this Indian team does have a habit of following a playing eleven routine in their practice sessions.

It remains to be seen what order they bat in on Saturday, but if it remains the same, this could settle the opening debate once and for all.
When opening the innings, Rohit has scored at 48.24 in 41 innings. Of course this figure falls if those two double-hundreds are taken out (average 37.48 in 39 innings and just the one hundred).

But demoting a two-time double-centurion in ODIs is not easy. When batting anywhere from number 4 to 7, he averages 34.20 in 70 innings with two hundreds.In comparison, Rahane did well opening the innings while Rohit was injured, scoring at 39.54 in the 11-odd matches, with two hundreds and a fifty.This is a significant rise in comparison to his career average of 29.28. In fact throughout his short career so far, whenever he opens the innings he scores at 31.03. On the few occasions he has batted at number four (through 2013-14), he only scores at a mere 23.88. There is not much separating to the two in terms of statistics. The Indian captain is not one to rely on such stats either. But he will have to make a firm decision soon enough, with the countdown to India’s 2011 title defence having begun already. 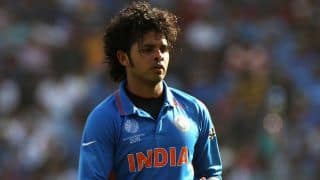