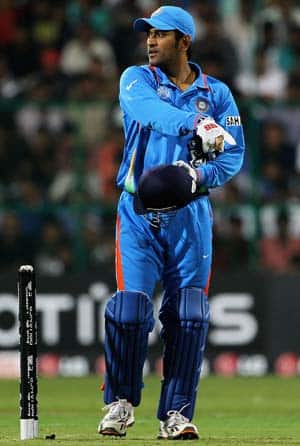 “I find Dhoni a lot like Botham. Dhoni is also blessed with a lot of natural ability like Botham and both could single-handedly win matches for their countries. Dhoni, like Botham, couldn’t have walked alone in a team on the basis of one strength. But the overall package makes him as good an all-rounder as Botham,” Brearley told PTI during an interaction on the sidelines of the Indian premiere of James Erskine’s new film ‘From the Ashes’.

Asked about Dhoni’s batting abilities, Brearley was quick to reply, “He is a brilliant No 7 batsman for any Test team.”

Someone who has always been regarded for knowing a thing or two about the “Art of Captaincy”, Brearley found Dhoni’s move to promote himself up the order during the World Cup final very “impressive.”

“I haven’t watched his captaincy for a long period of time and it won’t be fair to comment on his leadership skills. Whatever little I have seen of him, I have found him to be very calm under pressure which is a sign of a good captain. Also, I liked the manner in which he promoted himself up the order in the World Cup final and played such a fantastic knock.”

Among the international captains, the 69-year-old feels that Graeme Smith has done a fabulous job for South Africa.

“It’s not easy to lead your country close to a decade. He became skipper when he was only 22 and has done a commendable job. Among the England captains, I like the way Andrew Strauss is leading the side. I expect him to be around for another three to four years. But it was Nasser Hussain who first instilled the belief that we can fight.”

Unlike a lot of purists from the older generation, Brearley is not averse to T20 cricket but he wants things to be looked at in proper perspective.

“I like watching T20 and I am not against money coming in. But definitely, it should be spent properly. T20 will stay but Test cricket should remain the ultimate form. Look at Lasith Malinga. He quit Tests to prolong his career in shorter version. Now that’s something I don’t like.”

The compassionate side of him comes out when he expressed his feelings about the spot-fixing scandal and the jail sentences to the trio of Mohammed Amir, Mohammed Asif and Salman Butt.

“I feel Amir’s verdict was a bit harsh as he is very young. As far as the other two are concerned, absolutely correct decision.”

Talk about the historic 1981 Ashes series, Brearley tells in no uncertain terms that he could handle a character like Botham better than any other England captain.

“I had the least of problems handling Botham. We got along well and had no problems unlike some of the other captains after me faced. We were dependant on each other.

“Also I had him at the best time and when he was at his peak as a player. I believe when he became less good as a bowler, the problems started,” he signed off. (PTI)

Yuvraj Singh promises he will return to action soon