Mahendra Singh Dhoni and Michae Clarke have left the mind games to their teammates and their camp followers. The two have made politically correct statements before the Boxing Day Test. 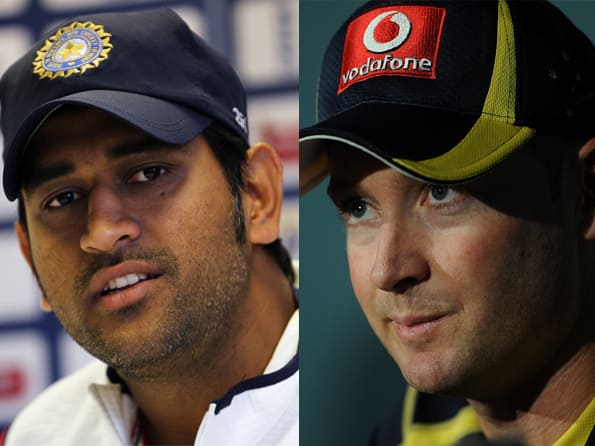 Mahendra Singh Dhoni and Michae Clarke have left the mind games to their teammates and their camp followers. The two have made politically correct statements before the Boxing Day Test.

If Dhoni has scrupulously maintained that he is concerned about his team’s strengths and weaknesses than worry about the opponents, Clarke is a little more forthcoming in saying that he has the ammunition to take 20 wickets at the Melbourne Cricket Ground to win the first Test.

The two have not tried to undermine the other side and have shown the Yuletide spirit before the first ball in the series is bowled. Both captains have vowed to be competitive and fight hard on the field without marring the spirit of the game.

Clarke has said that his side would be aggressive without crossing the limits while Dhoni reciprocated saying his side would play tough cricket but avoid the bad blood between the two teams that almost wrecked the tour midway four years ago.

Thus there is some understanding on the ground rules, now on to cricketing merits and demerits. By all accounts, man-to-man India look far superior on paper. Everyone seems to agree that this India team is perhaps the strongest and in the same breath wonders if ever the Australians fielded such a weaker eleven.

No Test team in contemporary cricket can boast of four exceptionally skilled and celebrated men like Sachin Tendulkar, Rahul Dravid, V.V.S. Laxman, Virender Sehwag and Zaheer Khan, not to talk of Dhoni, easily the most unflappable captain. That accounts for half the side.

Take the openers, Sehwag and Gautam Gambhir between them they have 11,571 runs in 136 Tests, the former having two triple centuries in his 22 and the latter one double in his nine. On the other hand, the Australian openers David Warner and Ed Cowan have two Tests.

Warner has come a long way from an explosive twenty20 batsman to a feared Test player, having carried the bat through in only his second Test. More important, Sehwag can win a match on his own and the Australians are hoping his Delhi Daredevils teammate Warner would do it for them.

The stats of Tendulkar, Dravid and Laxman can unnerve any attack and all three have phenomenal record in Australia, never mind they may not have done all that well at the MCG. The three are on their last visit and they know there is nothing like winning the series for the first time Down Under. The three have stated loud and clear that they should be judged how good they still are, not how old they are.

The Australians are tired of waiting for Ricky Ponting and Mike Hussey to bat like the Indian trio and win matches. The two stalwarts with over 17,000 cumulative runs are on borrowed time. One more failure and their time is up.

The Australians have already started rebuilding the team, bringing in left-handed Cowan at 29 for his Test debut. A protege of the late Peter Roebuck, the New South Wales-born went to Sydney’s Cranbrook School, where he came under the wings of the former Somerset captain, who taught English and was a cricket coach there. He moved to Tasmania three years ago and started scoring heavily this season, a coincidence, from the day Roebuck passed away. He hit four hundreds in four matches, including one against the Indians at Canberra, and forced his way into the Test eleven.

If the batting is a problem for Australia, India’s concern is bowling. The Australians are heavily depending on the raw pace of James Pattinson and the swing of Peter Siddle and Ben Hilfenhaus. They feel a bit of green on the pitch can encourage the pace men to extract bounce and movement, forgetting fit Zaheer and Ishant Sharma and Umesh Yadav can exploit the conditions as well as the Australians. The tall, lanky Ravichandran Ashwin, too, can use the bounce with his high action.

The Indians are playing on the same four pitches they played in 2007-08 and they know what is on offer at MCG, Sydney Cricket Ground, WACA at Perth and the Adelaide Oval.

Don’t forget, India won at Perth and if the umpiring had been error-free they would have won the series 2-1 instead of the other way round. Come to think of it, in 2003-04, the leading five batsmen Sehwag, Dravid, Tendulkar, Ganguly and Laxman scored big hundreds and if they had been a little bolder they could have won that series, too. They can do it again, this time in a more aggressive manner.

Ticking the boxes, the Indians can feel good on many counts, but, that will count only if they click as a team. (IANS)