Pakistan opener Nasir Jamshed has made the biggest move in the latest Reliance ICC Player Rankings for ODI batsmen while Indian captain Mahendra Singh Dhoni returned to the top five. 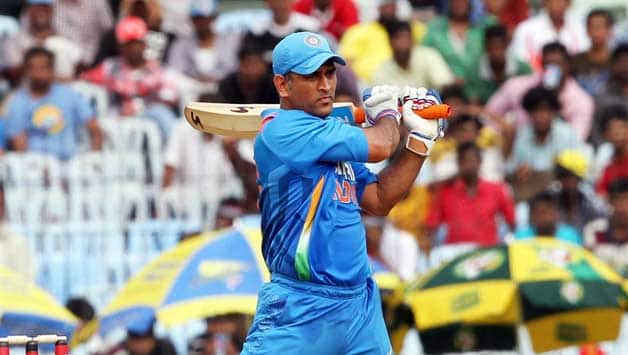 Pakistan opener Nasir Jamshed has made the biggest move in the latest Reliance ICC Player Rankings for ODI batsmen while Indian captain Mahendra Singh Dhoni returned to the top five. The latest rankings were released on Monday, a day after the conclusion of the three-match ODI series between rivals India and Pakistan.

Nasir jumped 45 places to 31st spot, while Dhoni returned to the top five after consistent performances with the bat in the series, which Pakistan won 2-1.

In the Reliance ICC Player Rankings for ODI bowlers, Pakistan’s duo of Saeed Ajmal and Junaid Khan made gains, while Mohammad Hafeez became the number-one ranked ODI all-rounder for the first time in his career.

Jamshed was the top run-getter in the series with 241 runs, which included back-to-back centuries in Chennai and Kolkata. Nasir’s exploits with the bat fetched him the Player of the Series award, and he achieved a career best ratings of 588 to reach 31st position.

Dhoni’s 203 runs from the three games have helped him move up two places to fourth in the batting table. Other batsmen to make upward movements include Suresh Raina in 26th (up by one) and Shoaib Malik in 78th (up by two), while Yuvraj Singh has re-entered the rankings in 41st position.

The batting rankings is still headed by South Africa’s Hashim Amla followed by teammate AB de Villiers in second place, with Virat Kohli moving down a place to third.

Number-one ranked bowler Saeed Ajmal scalped eight wickets in the series at an average of 10.75, which has helped him achieve career-best rating of 801 points.

The spinner becomes the third Pakistan bowler after Wasim Akram and Saqlain Mushtaq to break the 800-point barrier, which in ranking terms is the benchmark for top bowlers.

Saeed’s 801 points has put him in joint 25th position along with West Indies’ Courtney Walsh in the Reliance ICC Best-Ever ODI Ratings.

Pakistan paceman Junaid Khan, who was the joint-highest wicket-taker with Saeed with eight scalps, rose 62 places to 55th, which has helped him achieve his career-best rating of 466 during the series.

Also moving up is India paceman Ishant Sharma, who has jumped 24 places to 72nd.

India’s Ravindra Jadeja has also climbed two places to seventh in the all-rounders’ list. The left-hander has moved up one place to 70th in the batting list and has also lifted 11 places to 23rd in the bowlers’ table.