MS Dhoni conveyed his decision to step down from limited-overs captaincy on January 4, 2017.

MS Dhoni took the world by surprise by stepping down as India s One-Day International (ODI) and T20 International (T20I) captain. According to reports, it is believed that he was asked by the selectors to resign from his post. Dhoni will now play under the leadership of Virat Kohli in the limited-overs team, beginning with the series against England, which commences from January 15. BCCI’s chairman of selectors MSK Prasad has apparently told Dhoni to step down when they met in Nagpur during the Ranji Trophy 2016-17 semi-final between Jharkhand and Gujarat. Dhoni had flown to Nagpur as the mentor of his domestic side, Jharkhand.

However Prasad denies asking Dhoni to step down. “There was no pressure on Dhoni to resign from captaincy. It was his personal decision. He informed me during the Ranji Trophy semi-final between Jharkhand and Gujarat in Nagpur,” the former India wicketkeeper said, according to cricketnext.com. Prasad in fact praised Dhoni after he resigned. I salute him for his sense of perfect timing. He knew that Virat [Kohli] is now a proven customer who has done exceptionally well as a leader in Tests. According to a report in Hindustan Times, the decision to anoint Kohli as captain across all three formats was taken in September 2016.

It was explained to Dhoni that he would be almost 38 when the ICC World Cup 2019 gets underway, which is believed to be the reason he should let someone else take over the reins. Dhoni conveyed his decision to step down on January 4, 2017.

Bihar Cricket Association (BCA) Secretary Aditya Verma says he has information from concrete sources that BCCI Joint Secretary Amitabh Choudhary has asked Prasad to tell Dhoni to resign as captain. “Choudhary then telephoned MSK Prasad and instructed the latter to ask the cricketer about his future plans. Dhoni was hurt with the whole episode and sent across his resignation soon after,” Verma was quoted saying according to Economic Times.

READ: Gavaskar: Had Dhoni retired, would have protested outside his house

Dhoni has been picked in the England team as a wicketkeeper and will also lead the side in one of the warm-up matches. Dhoni is India s most successful captain, having led the side to all major ICC trophies. India also reached No. 1 position in Tests under his leadership. He however decided to retire from the longest format in December 2014. 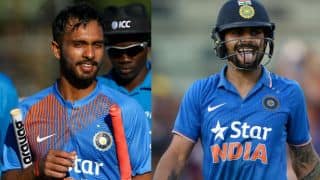