The 33-year-old wicketkeeper-batsman played 90 Tests for India, 60 as captain with 27 wins — the most by any Indian skipper. Tendulkar congratulated Dhoni on a wonderful career and also urged him to help India defend the World Cup title.

“A great competitor, and someone who I think Indian cricket owes a lot to,” former Australian captain Ponting wrote on Twitter.

“Love the way @msdhoni plays the game … But it’s now the right time for @imVkohli to take the Indian Test team in a new direction,” Vaughan tweeted.

Former Sri Lankan batsman Russel Arnold said that the Indian team will be starting the New Year under a fresh captain.

Indian legendary spinner Bishan Singh Bedi was taken by surprise following Dhoni’s decision to quit in the middle of the ongoing Test series.

“MSDhoni’s retirement in midst of test series leaves lot of us perplexed! But that’s his prerogative.I’d like 2 wish MSD Happy Retirement!!,” Bedi wrote on Twitter.

Dhoni’s teammate Suresh Raina put up a picture on his Twitter account and said: “Valiant while you led. Valiant in your departure. #Respect @msdhoni.” 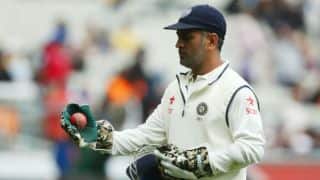 When Henry Blofeld observed proximity between Andrew Flintoff and his shadow