Virat Kohli on Wednesday said the tips he picked up from India captain MS Dhoni in the West Indies proved beneficial for him while leading a young Indian team in Zimbabwe, where they inflicted a 5-0 series whitewash on the hosts. 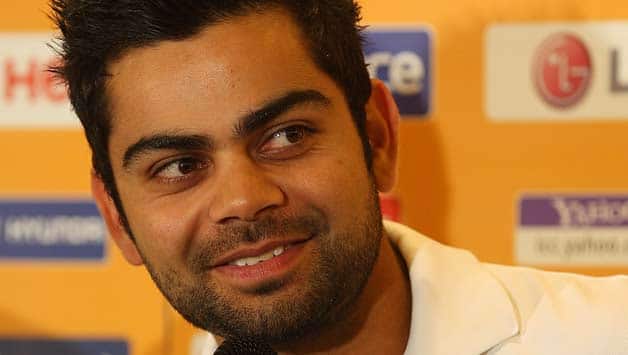 Virat Kohli on Wednesday said the tips he picked up from India captain MS Dhoni in the West Indies proved beneficial for him while leading a young Indian team in Zimbabwe, where they inflicted a 5-0 series whitewash on the hosts.

Kohli had captained the Indian side in three One-Day Internationals (ODIs) in the West Indies when Dhoni was sidelined after hurting his hamstring in the first match of the tri-nation series.

“He [Dhoni] is a guy who doesn’t say much. But I keep talking to him about different situations and what I could do and how should I keep myself calm in pressure situations while captaining the side,” Kohli said when asked about Dhoni’s influence on him as a leader.

“It helped me chatting to him in the West Indies when he wasn’t playing and I was captaining the side. All the tips he gave me really helped me.”

Kohli said he has not been able to speak to Dhoni after the Zimbabwe win since Dhoni is presently enjoying a break.

“When he goes away for a holiday it is very hard to contact him. I tried to message him on the phone but I couldn’t reach. I guess I’ll be seeing him soon and speak to him about it [Zimbabwe win],” Kohli told reporters on the sidelines of a promotional event in New Delhi.

Kohli also lauded left-arm spinner Ravindra Jadeja, who recently topped the ODI bowlers’ chart in the ICC rankings, saying the consistency is paying off for the Saurahstra-lad.

“I am very very happy that he got the number one ODI bowling ranking. He has worked hard over the past few years. It is really good to see him come up the ranks as I have played Under-19 cricket with him.

“I was the captain when he played with me in the U-19 World Cup. It’s really good to see him grow in international cricket with all of us. I hope he keeps up the good in the future,” Kohli said.

Kohli feels that India A tour to South Africa will groom the players to take on bigger challenges.

“Emerging Players’ tournament is good for cricketers. I remember I made a comeback because of that tournament [2009 in Australia]. It’s a very competitive tournament. I am sure every player will give his 100 per cent in the field and come out better,” the Delhi cricketer added.