Laid low by injury he might be, but Indian cricket captain Mahendra Singh Dhoni's birthday celebrations turned out to be quite lively with the West Indian cricketers also joining the party at Port of Spain. 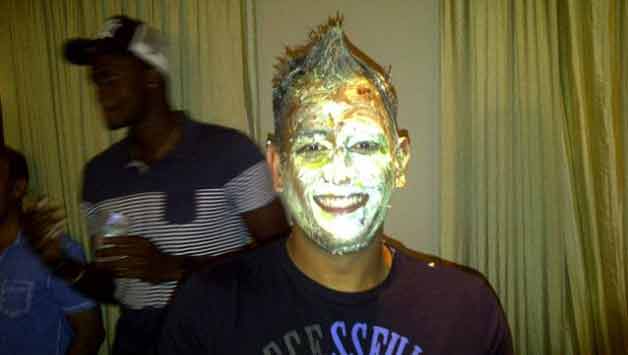 Laid low by injury he might be, but Indian cricket captain Mahendra Singh Dhoni‘s birthday celebrations turned out to be quite lively with the West Indian cricketers also joining the party at Port of Spain.

Dhoni, who turned 32 on Sunday, has stayed with the Indian team here despite being out of the ongoing ODI tri-series due to a hamstring injury.

After Sunday’s celebrations, India’s most successful skipper took to twitter to give a glimpse of the party this morning.

“Thanks everyone specially Bravo for the lovely evening and the soft cake all over my face and hair,” Dhoni posted along with a picture of his face smeared with cake. “All west Indian players and friends present were like no no u don’t celebrate like tht, I said its just the beginning (sic),” the Jharkhand-lad wrote.

The photograph of the cake, which had ‘MSD 7’ inscribed on it, was posted by Dhoni along with another tweet.

Dhoni began his career in 2004/05 against Bangladesh, a rather forgettable debut considering that he was run out for a duck.

But his career graph has only headed northwards after that and he is easily one of the most revered sportspersons in the country right now.

Under Dhoni, India have won the ICC World T20 2007, the ICC World Cup 2011 and the ICC Champions Trophy 2013, is currently in the West Indies with the national team for an ODI tri-series.