Apart from sharing their surname and making a living out of covering sports, it is the 'MSD connection' that binds the trio of Ajay Kumar, Rakesh Kumar and Satish Kumar. 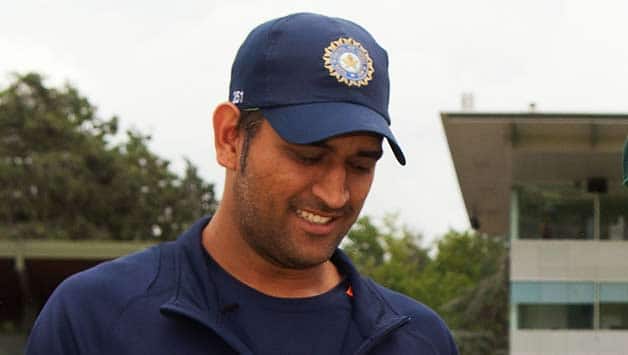 Satish Kumar, who played with MS Dhoni (above) for about five years in the Central Coalfields Limited (CCL) team, said Dhoni was passionate about his cricket and used to play with the same seriousness in both friendly and official matches © Getty Images

Apart from sharing their surname and making a living out of covering sports, it is the ‘MSD connection’ that binds the trio of Ajay Kumar, Rakesh Kumar and Satish Kumar.

All three have played club cricket along with Indian captain Mahendra Singh Dhoni and by their own admission, they never expected their beloved “Colonel” to lead the national team with so much success.

No wonder, the first ever one day international in Ranchi forced the friends to take a trip down memory lane.

“I am wonder struck! It’s a moment of pride for us and glory for Ranchi that one among us has gone on to become India captain,” Ajay Kumar, who used to play from Youth Sporting Club alongwith Dhoni, became nostalgic.

“Players of our Royal Sports Club used to bet that the player wearing the costliest cap should gift it to the player playing the best knock.

“Dhoni used to win quite a few. Once in a league match, Dhoni was so thrilled winning the SG cap for playing a winning knock of 63 runs, it was seen to be believed,” Rakesh Kumar shares.

Sharing another interesting episode occurred in 1995/96, Rakesh Kumar said,”We won the ‘B’ division league and expected that some photojournalist would come to take a snap and publish it in a local newspaper. But nobody turned up.

“So we all went to ‘Crown Studio’ in Ranchi and got a team picture clicked. That photo became an instant hit after Dhoni’s success.”

Satish Kumar, who played with Dhoni for about five years in the Central Coalfields Limited (CCL) team, said Dhoni was passionate about his cricket and used to play with the same seriousness in both friendly and official matches.

“He never tolerated loss. Once he struck over 70 runs in a league match in a day/night tournament in Lucknow, but our CCL team had lost that match.

“Dhoni was adjudged as the Man-of-the-Match and got a tea set as a gift. He was so dejected with the loss that he dropped the tea-set in the dressing room saying, what use of it when the team lost the game . We had won that tournament after playing good cricket thereafter,” Satish Kumar added.

“I never thought that my junior will one day not only conquer the cricketing world but would lead the country in our home town, which had never hosted any international match,” Dhoni’s one-time pal and now an advocate, Suraj Mohan, says.

“In 2000, Dhoni joined friends to dance at a baraat (marriage procession) of a friend. One of our friends Sailesh lifted Dhoni high up and asked the video cameraman to shoot the scene as Dhoni is going to become a great player and I would keep the CD for posterity,” Mohan said, adding the CD is still with him.

The then CCL captain Adil Hussain, who had also led Bihar Ranji team, said,”We are all proud that Dhoni has made it big. He never used to tolerate loss. I hope and wish Dhoni continues with the same form displayed in the current series to even it.”

All of these former colleagues of Dhoni have shared that, “Dhoni has not changed a bit. He keeps in touch whenever he comes here. He talks the same way as he used to talk with us in his formative years of the game.”

“The former cricketers of the state are planning to watch the ODI together to see enjoy Dhoni leading Team India. Then only I can share my feelings,” Hussain said when asked how he feels Dhoni leading the country in his home town, which hardly used to get even good Ranji matches as Jamshedpur had the lion’s share till recently.

Ranji Trophy 2013: Jaydev Shah propels Saurashtra to 274/5 on Day One against Punjab in semi-final