India beat Sri Lanka by one wicket to win the Caribbean tri-series final at the Queen’s Park Oval in Trinidad on July 11, 2013. MS Dhoni’s knock of 45 from 52 balls guided India to the 202-run target in 49.4 overs. Sri Lanka were bowled out for 201 in 48.5 overs after Dhoni won the toss and sent them into bat. India beat Sri Lanka by one wicket to win the Caribbean tri-series final at the Queen’s Park Oval in Trinidad on July 11, 2013. MS Dhoni’s knock of 45 from 52 balls guided India to the 202-run target in 49.4 overs. Sri Lanka were bowled out for 201 in 48.5 overs after Dhoni won the toss and sent them into bat.

As the last over began India required 15 to win. Dhoni struck a six straight down the ground of the second delivery bowled by Shaminda Eranga and the sliced a four towards third-man off the very next ball. He then launched a six over wide long-off to seal the victory with two balls to spare. This follows India’s triumph in the ICC Champions Trophy 2013 just last month.

In an innings where the fortunes swung back-and-forth, the Indian captain held his nerve and produced the goods when it really mattered. Dhoni was making a comeback after suffering a hamstring injury in India’s first match of the tri-series against West Indies in Jamaica on June 30.

The Indian chase was cautious and slow on a wicket that offered a bit of everything for the bowlers. Just when Shikhar Dhawan seemed to get adjusted to the wicket, he got an unplayable ball from Eranga. The ball pitched just on a back of a length and took off the surface and surprised Dhawan. The ball hit high on his bat and Kumar Sangakkara took the catch behind the wickets.

Virat Kohli then got done by a delivery that moved away after pitching on a good length. Again it was Eranga, who was the bowler. Kohli edged the delivery to Sangakkara. India were 27 for two in only the 11th over. Then Dinesh Karthik joined Rohit Sharma in the middle and put together a 50-run stand for the third wicket.

The duo began slow, but gained momentum as the partnership grew. Left-arm spinner Rangana Herath then broke the resilience. Karthik punched hard at a length delivery from Herath, but the ball bounced a little extra and found the edge of the bat and flew straight to Mahela Jayawardene at first slip, who took a couple of grabs at it before holding the catch.

Suresh Rain then walked into the middle and seemed to read the wicket better than anyone else. He scored freely and his 62-run partnership with Rohit for the fourth wicket came at a run rate of over seven and a half runs an over. The stand seemed to take Sri Lanka out of the match. Herath then struck again as his length ball kept surprisingly low and crept under Rohit’s bat and hit the timber. Rohit departed for a 89-ball 58 hitting five fours and one six.

Raina then tried a rash lofted drive over long-on off Suranga Lakmal’s bowling, only to edge to the wicketkeeper. Herath then completely turned the tide towards Sri Lanka’s favour in his very last over. First he dismissed Ravindra Jadeja leg before with a delivery that turned sharply. Then he sent Ravichandran Ashwin back into the dressing off the very next ball with a delivery that went straight and struck his pads.

India were suddenly at 152 for seven in the 38th over. Malinga then got into the act and got Bhuvneshwar Kumar out leg before with a trademark slow yorker. There was a break in play as Malinga was hit by a water bottle thrown from the crowd during the 43rd over. It was then R Vinay Kumar’s turn to perish in the 47th over to leave India tattering and with one wicket to spare.

There were some tense moments towards the end as No 11 Ishant Sharma almost got run out a couple of times. Then when Sri Lanka all but seemed to have wrapped-up victory with one over to spare, Dhoni smashed 16 runs in three consecutive deliveries off the last over to win India the match.

Earlier, Dhoni elected to bowl after winning the toss. He replaced Murali Vijay and R Vinay Kumar replaced Umesh Yadav in the Indian eleven. For Sri Lanka, Suranga Lakmal and Kushal Perera came in for Dilhara Lokuhettige and Jeevan Mendis.

Bhuvneshwar got a couple of early breakthroughs as India began well. But a 122-run partnership between Kumar Sangakkara (71) and Lahiru Thirimanne (46) guided Sri Lanka to 171 for two at one stage. Ravindra Jadeja was the star with the ball as he picked up four wickets. Sri Lanka were eventually bowled out for 201 in 48.5 overs.

The total seemed under par at the time, but proved to be very challenging for India right till the very end.

Man of the Series: Bhuvneshwar Kumar 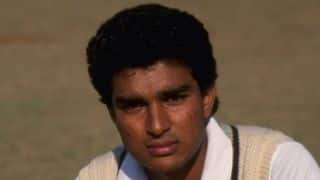 Sanjay Manjrekar: The blade of his bat was the face of perfection