Kolkata: Indian skipper Mahendra Singh Dhoni on Saturday expressed surprise over the spinners throughout getting plenty of grip from the Eden Gardens track in the World Twenty20 game against Pakistan. Dhoni conceded that he had thought the track would spin a bit. “I thought it will spin a bit. We felt there was a bit of moisture and usually when that is the case the spinners also get a bit of grip. But what was surprising was to see throughout the game the spinners got plenty of help off the wicket.. It got slightly better in the second half. But also they [Pakistan] had only one spinner,” he said. FULL CRICKET SCORECARD: India vs Pakistan, Group B Match 19 of ICC T20 World Cup at Eden Gardens

Asked whether it would have been better to have an extra spinner instead of a third seamer. Dhoni said the team management opted for Pandya because of the dew. “Now The third seamer can give you a bit of help if there is dew around but if I knew that there was so much turn on offer, then I don’t have a problem playing an extra spinner.” MS Dhoni: India under pressure due to spotless record against Pakistan in World Cup

With Virat Kohli scripting yet another famous victory — this time against arch-rivals Pakistan — Indian skipper MS Dhoni has attributed the talismanic batsman’s hunger to perform and willingness to take up the challenge as the propelling factors behind his amazing consistency. “His biggest plus point is he takes everything as a challenge. He wants to improve. He wants to contribute in every game. He wants to score every game. The hunger to perform, the willingness to take up the challenge — that makes him special,” said Dhoni. 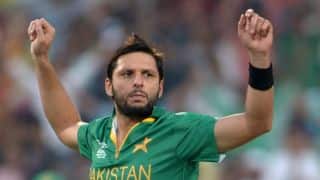