MS Dhoni: The Untold Story not to be released in Pakistan

MS Dhoni: The Untold Story not to be released in Pakistan

The movie is expected to hit theatres on September 30 and the crew, that includes Sushant Singh Rajput, and Dhoni himself have been busy with the promotions.

MS Dhoni‘s biopic, MS Dhoni: The Untold Story, is probably one of the most anticipated movies of the year, But just when its release date was only a few days away, Pakistani distributors have decided not to release it. According to reports, IMGC Global Entertainment, a Pakistan-based distribution company has backed out of releasing the film in Pakistan. The company’s chairman was quoted as saying, “Amid current tension between the two countries, we have decided not to release the film.” Because Pakistan is the third largest overseas market for Bollywood, the ban is expected to affect the biopic’s box office earnings. The movie hasn’t been listed in the to-be-released list of movies in the country.

A few days back, in the aftermath of the Uri attack when 18 Indian soldiers were killed, Raj Thackeray’s party Maharashtra Navnirman Sena (MNS) had issued a warning to Pakistani actors, asking them to leave the country. The films that were targeted included Shahrukh Khan starrer Raees, which has Mahira Khan as the female lead, and Fawad Khan starrer Ae Dil Hai Mushkil. READ: ‘MS Dhoni: The Untold Story’ declared tax free in Jharkhand

Earlier, Thackeray had issued a warning to the makers of the movie, not to release the Marathi dubbed version of the movie in Maharashtra. The movie is expected to hit theatres on September 30 and the crew, that includes Sushant Singh Rajput, portraying the role of MS Dhoni in the biopic, and Dhoni himself have been busy with the promotional activities for some time now. Also, Dhoni has his fans in Pakistan as well, wonder how they would react to this news. 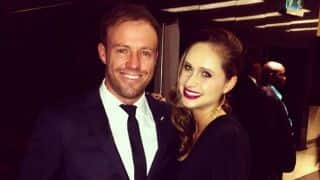