MS Dhoni top-scores for Jharkhand vs Gujarat in Vijay Hazare Trophy 2015-16, Round 2

MS Dhoni top-scores for Jharkhand vs Gujarat in Vijay Hazare Trophy 2015-16, Round 2

MS Dhoni scored nine in his comeback match against Jammu & Kashmir in Round 1.

India limted-overs skipper MS Dhoni top scores for Jharkhand in their second match of the Vijay Hazare Trophy 2015-16 against Gujarat. Jharkhand managed just 177 in their innings. Ishank Jaggi was the only other batsman to have made a significant contribution opening the innings as he finished with 34. Gujarat should win the match easily, unless if they find a way to get themselves into trouble. Dhoni made just nine runs in his comeback game earlier against Jammu & Kashmir (J&K), but Jharkhand managed to win the match by five runs. this tournament is a good opportunity to get himself into good shape ahead of India’s tour of Australia, which will take place in 2016, where Dhoni will lead Team India. Live Cricket Score, Vijay Hazare Trophy 2015-16, Jharkhand vs Gujarat, Group A match at Alur

Dhoni will then return to India along with the team and play a T20 International (T20I) series against Sri Lanka ahead of ICC World T20 2016. Dhoni lead India to a win in the inaugural edition of the T20 World Cup. He also led the team to the final of the tournament in 2014. India also won the ICC Cricket World Cup 2011 and became the first team to win the trophy at home. Australia achieved the same feat when they beat New Zealand in the ICC Cricket World Cup 2015 in Australia.

Dhoni was bowled by Jaspreet Bumrah in this match, but it was lef-arm spinner Waseem Raza, who dismissed him for single digit in the previous game. Dhoni is playing domestic cricket for the first time in eight years and is playing under the leadership of Varun Aaron. 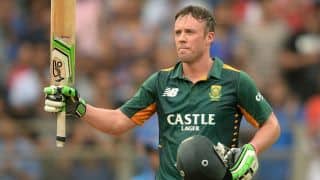 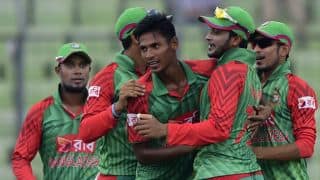