Ever since MS Dhoni's last series victory, he lost tri-series Down Under and bilateral series against Bangladesh, South Africa and Australia.

India edge past Zimbabwe by 8 wickets in 2nd ODI at Harare Sports Club and seal the three-match ODI series. This is MS Dhoni‘s first series victory since October 2014 (when West Indies toured India). Since then, Captain Cool lost two ICC’s flagship tournaments: ICC Cricket World Cup 2015 and ICC World T20 2016. As a matter of fact, Dhoni is the only captain to win ICC World T20, ICC Cricket World Cup and ICC Champions Trophy. Dhoni has been at the helm for the last 9 months, and undoubtedly, is India’s most successful leader in shorter formats. This win won’t affect Dhoni’s cricket approach but it at least broke the losing streak. LIVE CRICKET SCORECARD: India vs Zimbabwe 2016, 2nd ODI at Harare

Ever since his last series victory, Dhoni lost a tri-series Down Under and bilateral series against Bangladesh, South Africa and Australia. There have been talks about replacing him with star batsman Virat Kohli as captain in shorter formats. Kohli was appointed as the Test captain when Dhoni called it day in the longest format. Under Kohli’s captaincy, India won a Test series in Sri Lanka after 22 years. Moreover, his side beat South Africa 3-0 at home in 2015. Read – MS Dhoni has always been my role model, says KL Rahul

In 276 matches, Dhoni has plundered 8,919 runs at an average of 51.25, with an impressive strike-rate of 89.27. He is the fourth highest run-scorer for India in ODIs and needs 634 runs to go past Mohammad Azharuddin’s 9,378 runs. Read – Yuzvendra Chahal: Playing under Dhoni felt like dealing with friend

ICC Champions Trophy is schedule to be played in June next year, and Dhoni’s Men in Blue will look to defend the title. If Dhoni wins emerges triumphant, he will become the second captain to attain the achievement of winning the Champions Trophy twice (first was Australia’s Ricky Ponting). 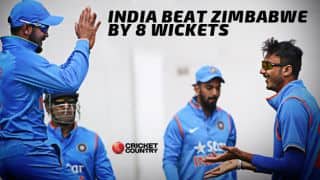