Nari Contractor, who led India to its first cricket Test series win against England over half-a-century ago, disapproved skipper Mahendra Singh Dhoni's continued insistence on a rank turner from Day One of the home matches recently. 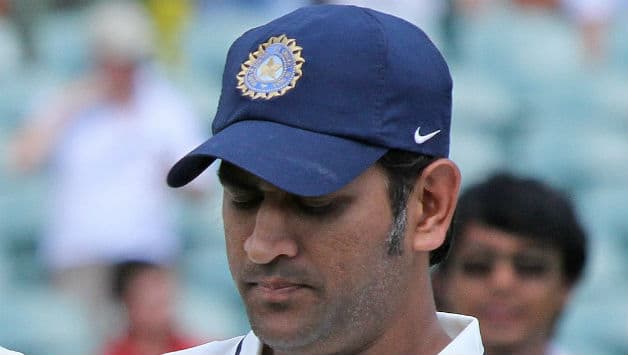 MS Dhoni sparked a controversy after having a tiff with the veteran curator of Eden Gardens, Prabir Mukherjee following Dhoni’s demand for rank turners at Kolkata PTI

Nari Contractor, who led India to its first cricket Test series win against England over half-a-century ago, disapproved skipper Mahendra Singh Dhoni‘s continued insistence on a rank turner from Day 1 of the home matches recently.

The 78-year-old, whose international career was abruptly cut short by an on-field skull injury, said such instructions were never given by captains during his playing days.

“During our days, we hoped the wicket would turn. But we never instructed the curator to prepare a particular type of wicket. This is all I will say on this,” Contractor told IANS.

Dhoni’s demand for dust bowls has led to a controversy with the Cricket Association of Bengal (CAB) curator Prabir Mukherjee calling it “immoral and illogical” and at one point threatening to quit his job of preparing the Eden Gardens track at Kolkata for the Dec 5-9 India-England Test. However, later on CAB president Jagmohan Dalmiya persuaded him to continue.

In the second Test of the series at Mumbai’s Wankhede Stadium, the Indians were given a turner but the home team failed to come good on it. In contrast, the English slow bowlers excelled, resulting in a thumping 10-wicket triumph for the visitors.

“We could never even think of making such demands,” said Contractor.

The 78-year-old Contractor and former England skipper Ted Dexter, the oldest surviving former captains of their sides, have been invited by the CAB as part of its commemoration of 80 years of India as a Test playing nation and India-England Test cricket history.

The duo will be felicitated at the Eden Gardens here Dec 4, before being taken round the park in golf carts on the opening day of the coming Test match.

England had hosted India in 1932 after the, then, British colony got Test status. The Douglas Jardine-led English team paid the return visit in 1933-34.

“I have lot of pleasant memories of Eden Gardens. Though the structure was very old, Eden was one of the best grounds in the world then. And I think it is still now, despite the reduction in the spectator capacity,” said the former left-hand bat who played half a dozen Test matches at the Eden between 1955 and 1962.

He fondly remembered the 187-run win over England here under his captaincy in the fourth Test of the 1961-62 series. Incidentally, Dexter led the Englishmen.

“This is history. So many years have passed. But I still remember every minute of it. It was a great match. Our spinners (Salim Durrani and Chandu Borde) bowled well. And we went on to win the next Test also in Chennai. That was our first ever series win against England,” Contractor said.

Contractor, whose highest at the Eden is 61, said he has no regret for failing to get a hundred on the iconic ground.

“In cricket, you don’t brood over your personal failures. You rejoice at the team’s successes. Whether you contribute to your team that only matters.”

Referring to the 61 he scored on the ground in 1955 in the fourth Test against the visiting New Zealand side, contractor said: “It was scored in difficult circumstances. We had fallen over 200 (204) runs short after the first innings and needed to save the match.”

Contractor had made his debut in the second match of the same series.

Only two months after the Eden win over Dexter’s side, Contractor had a near-fatal head injury negotiating a Charlie Griffith delivery in a colony game against Barbados in the West Indies.

Unconscious for six days, that was the last time he played for India.