Dhoni scored a stupendous 6-ball-23 in the match and ended the match perfectly.

Rising Pune Supergianst (RPS) have finally bagged a victory after a rough time in Indian Premier League (IPL) as they win their last match of the series against Kings XI Punjab (KXIP) and RPS coach Stephen Flemming has praised MS Dhoni‘s efforts in the match. Dhoni scored a stupendous 6-ball-23 in the match and drew the perfect finish to the match, handing the team a much-desired victory. Fleming called the innings special and KXIP coach Sanjay Bangar felt the same way. The match between the teams had no impact on the top-four positions. Full Cricket Scorecard: Rising Pune Supergiants  vs  Kings XI Punjab , Live Score, 53rd T20 Match, IPL 2016

As reported by Cricbuzz, Fleming said, “I think Dhoni is pretty remarkable, which probably covered up the performances that were below par. While we chased down 170, we were stuttering along. But individual brilliances helped us crossed the line. What we have been missing through the campaign were the special moments where players play match-winning innings. Steve Smith played a couple. MS [Dhoni] played one here. We have been good, but we were not outstanding. MS was outstanding and that is the difference between winning and losing.”

“I have not seen that before. There might have been times that gets out of reach for the other players, today he took it upon himself in winning the game. If you don’t get across the line, you analyse it. But again, he had unbelievable faith and ability to do it. He might have done that with India but I have not seen it in my time with Dhoni. That was part of an extraordinary effort,” he said.

“From finishing point of view, Dhoni has been frustrated. I think that (knock) will go a long way today to give him more confidence. He has been working very hard in the nets. He knew the role he plays is to win games in the back end. We have lost games that we should have won and we won a game here today that we should not have won. That is the nature of T20 but we showed today that we still have that brilliance, we still have the ability to clear the rope when needed. I dare say that it was vintage performance in the sense that we have seen that and come to expect that high standards. We certainly achieved that and exceeded that today,” Fleming added. 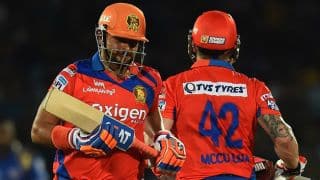