While fans and pundits have headed to a Parthiv Patel vs Wriddhiman Saha debate, MSK Prasad kept things simple with his comments.

Parthiv Patel made a strong case for himself as India’s preferred wicketkeeper-batsman in his comeback Test at Mohali. He composed 42 in the first innings as an opener and followed that with a brisk 67 not out in the second. He became the second fastest wicketkeeper half-centurion from India in Test cricket (in terms of balls faced and recorded). Though he dropped 3 chances, Parthiv’s glovework was neat. He was replacing the injured Wriddhiman Saha for the third Test and prior to this Test; there were raised eyebrows over this selection but the little man from Gujarat passed the test successfully, which will now give Indian captain Virat Kohli a ‘happy selection headache’. Full Cricket Scorecard: India vs England 3rd Test at Mohali.

While fans and pundits have headed to a Parthiv vs Saha debate, MSK Prasad kept things simple with his comments. The former Indian stumper and now the chairman of national selection committee was in Chennai, watching the Delhi vs Vidharba Ranji Trophy tie but the 41-year-old kept a tab on the proceedings in Mohali. Prasad is a pleased man, as Parthiv justified his selection with his impressive show but he had no qualms in admitting that Saha is the best wicketkeeper India has. He also spoke about the much talked about Rishabh Pant.

Parthiv’s statistics speak volumes about the way he has performed for Gujarat in the last few years. He has been very good with the bat, and more importantly, Parthiv’s glove work is much better than before. But Saha remains our No. 1 keeper, Prasad told Times of India.

Despite teenager Pant’s incredible domestic season with the bat, Prasad feels the 19-year-old should go through the processes before making it to the senior side.

Rishabh is an exciting youngster who plays attacking cricket. He is having a great maiden season, but I believe everyone should come through the system. Rishabh is someone who is definitely under the radar,” Prasad added.

In the post-match press conference, Kohli admitted that the team management are looking at all possible options depending on fitness and did not rule out the chance of playing Parthiv as a specialist opener if Saha is back. 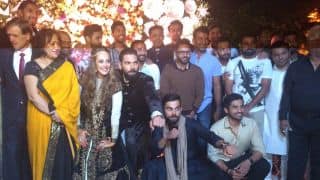