Mumbai edge out Kolkata; will face Bangalore in second Qualifier

Mumbai edge out Kolkata; will face Bangalore in second Qualifier

KKR did well to reduce MI from 81 for 0 to 133 for six, but couldn t pin down James Franklin and Harbhajan Singh who stitched together a 21-run stand as the tension mounted. MI now head to Chennai to face Royal Challengers Bangalore on Friday with the confidence of two straight wins. 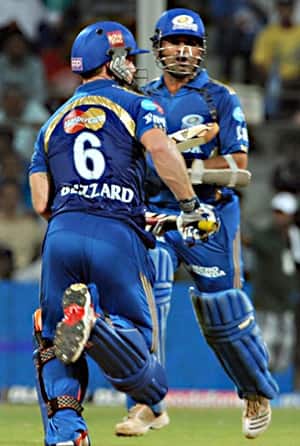 Having broken a sad trend of never scaling the knock-out stage of the IPL, Kolkata Knight Riders suffered a bout of vertigo and ended up exiting the competition. Their batting, bar a brisk 70 off 46 balls from Ryan ten Doeschate, lacked direction and substance and a Jacques Kallis-inspired revival came too late into Mumbai Indians gung-ho reply.

They did well to reduce MI from 81 for 0 to 133 for six, but couldn t pin down James Franklin and Harbhajan Singh who stitched together a 21-run stand as the tension mounted. MI now head to Chennai to face Royal Challengers Bangalore on Friday with the confidence of two straight wins.

To have a chance of winning KKR had to take wickets, but instead their bowlers were taken to task by Aiden Blizzard and Sachin Tendulkar. Blizzard set the tone for a make-room-and-go-hard type of innings with two sliced boundaries in the first over, and repeated the dosage when Iqbal Abdulla came on.

Tendulkar was more content sweeping deliveries off their line, and sweetly took four consecutive boundaries off Yusuf Pathan in the fifth over as MI s fifty came up. Blizzard continued to thrash away, repeatedly making room to free his arms, and send the fans into raptures with a huge uppercut for six off Brett Lee, who in ten deliveries to Blizzard conceded 23 runs.

Then came a period when KKR threatened to cause an upset. Blizzard slashed Lee to deep point, Rohit Sharma was run out for 0 by Gautam Gambhir, and Jacques Kallis bounced out Tendulkar (36) and Ambati Rayudu in successive overs. There was a further jolt when, with 25 needed off 27 balls, Shakib Al Hasan prised out Kieron Pollard with a slider. However, for the second match running James Franklin kept his nerve to steer MI past the finish line.

While Pollard and Tirumalasetti Suman fell attempting big shots, Franklin eschewed the aerial shots and relied more on superb placement. He judged where to hit the ball and wasn t flustered even as the match went into the last over. The win came with Harbhajan hitting Shakib over midwicket for six, cuing celebrations in the MI dugout.

That MI were left to chase so much owed much to a well-paced half-century from Ryan ten Doeschate after Tendulkar won the toss and opted to insert KKR. Coming to the crease at 20 for four KKR s worst start during the Powerplay ten Doeschate oozed life back into the innings with a fine innings.

KKR were hurt early in the piece by the loss of their openers, Kallis and Gambhir. Kallis was the first of Munaf Patel s three wickets, foxed into playing a false drive to mid-off where Tendulkar plucked a good catch. Gambhir rushed out to welcome Harbhajan with a four over the covers, but fell to the same bowler attempting an ambitious slog-sweep. Sreevats Goswami wafted at Munaf and was caught behind for 0, and Dhawal Kulkarni rapped Manoj Tiwary s pads in the sixth over.

Ten Doeschate provided some momentum, first hooking Franklin for six and then assaulting Pollard in a 15-run 11th over with a rasping cut and a heave over mid-on for six more. This stirred Pathan, who clubbed straight fours off Pollard and Harbhajan to improve his sagging strike rate, but his aggression was to be his undoing. Having been twice tested by short deliveries from Munaf, Pathan miscued an attempted flat-batted hack to Pollard in the deep.

A plucky 26 from Shakib helped KKR add 41 in 25 balls, but that one big over required never materialized. KKR managed just three fours and a six in the final four overs, and in the overall analysis that period proved crucial.

Man of the Match: Munaf Patel