Catch the live updates of the ninth match of CCL 2016 between Mumbai Heroes and Bhojpuri Dabanggs here.

Hello and welcome to CricketCountry’s live coverage of the ninth match of the ongoing Celebrity Cricket League (CCL) 2016 between Mumbai Heroes (MH) and Bhojpuri Dabanggs (BD) at Sector 16, Chandigarh on Saturday. The match will witness some fine actors from the two movie industries of India, fighting it out in CCL 2016. Bhojpuri Dabanggs are currently topping the charts in Group A of the league. They won both the matches that they have played so far and hence have four points and a net run rate of 2.335. On the other hand, Mumbai Heroes are a place down at the second slot in Group A. They have two points from as many matches, winning and losing a match each. Their net run rate is 1.625.

Live Cricket Score: Bhojpuri Dabanggs 166/3 | Overs 16.4 | Target 207 | BATSMEN: Uday Tiwary 81(43), Aditya Ojha 25(33) | Match has reached its climax. Uday Tiwary has played a blinder but can he take Bhojpuri Dabbanggs to vitory. Aditya Ojha has given him a helping hand by sticking around and giving him much of the strike. Dabanggs require 41 more runs from this moment on with 20 balls remaining. Match can go either way; it has been a truly thrilling encounter as expected.

Live Cricket Score: Bhojpuri Dabanggs 80/1 | Overs 6.4 | Target 207 | BATSMEN: Manoj Tiwari 21(16), Uday Tiwary 42(16) | It’s a rocking start by Bhojpuri Dabanggs. They are batting at a run rate of close to 12 which is exactly what the doctor ordered for them. Both the batters are playing well in tandem and looking set to to score a big one. Mumbai Heroes’ bowlers are not able to pose any threat till now accept for the wicket of Ram Pravesh Yadav but that too was because of the batter’s fault. Dabanggs now require 127 runs from 80 balls with nine wickets remaining.

Live Cricket Score: Bhojpuri Dabanggs 16/1 | Overs 2 | Target 207 | BATSMEN: Manoj Tiwari 2(3), Uday Tiwary 0(0) | Bobby Deol is bowling spin but the batters are picking his bowling well. However, he succeeds in drawing first blood for his team. Ram Pravesh Yadav attempts an aerial shot but fails to get his timing right and the fielder Raja Bherwani takes a good running catch near the mid off area. OUT! Ram Pravesh Yadav c Raja Bherwani b Bobby Deol 14(9)

Live Cricket Score: Mumbai Heroes 206/4 | Overs 20 | BATSMEN: Raja Bherwani 72(50), Aporva Lakhia 21(8) | Aporva Lakhia is the new batsman at the crease after the fall of Aftab Shivdasani. He advances down the track and hits the ball towards the on side for a big six. He follows it up with a boundary and a single. Raja picks a couple on the final ball of the innings. 206 is a huge total and Bhojpuri Dabanggs will have to bat extremely well if they wish to eclipse this score. OUT! Aftab Shivdasani run-out Vikrant Singh 10(7)

Live Cricket Score: Mumbai Heroes 156/3 | Overs 16 | BATSMEN: Raja Bherwani 53(38), Aftab Shivdasani 3(3) | Shabir Ahluwalia falls after a brisk innings. Aftab Shivdasani is the new batter at the crease. Raja Bherwani has smashed a quickfire half century. There has not been much discipline in Bhojpuri Dabanggs’ bowling since they have already given 12 extras in 16 overs itself. Ojha has been brought back into the attack. Batters are still attempting big shots but they are not able to get the timing right and also the placement. OUT! Shabir Ahluwalia b Khan 39(21)

Live Cricket Score: Mumbai Heroes 141/2 | Overs 14 | BATSMEN: Shabir Ahluwalia 38(19), Raja Bherwani 43(31) | Shabir Ahluwalia and Raja Bherwani have struck a cord and are batting well in tandem. Raja is just seven runs short off his fifty.  Shabir is also batting as if he is in a hurry. Mumbai is cruising along well with both the batsmen having steadied the ship after the dismissal of Samir Kochhar.

Live Cricket Score: Mumbai Heroes 67/1 | Overs 7 | BATSMEN: Samir Kochhar 41(18), Raja Bherwani 15(11) | Samir is now just nine short off his half century. Raja Bherwani is complementing him well after the fall of Riteish. Mumbai fans will be hoping that this partnership grows and blossoms. Dabanggs desperately need the wicket of Samir now. He is getting dangerous after every passing delivery. Chandigarh is an amazing city. Crowd is brilliant here. Some big celebrities and beautiful faces are here seeing the match. Actress Lisa Ray is one of them. In an interview with the anchor at the match she says that she loves football more than cricket. She adds: “If Mumbai wins today, it might be because of her. Lady luck!”

Live Cricket Score: Mumbai Heroes 45/1 | Overs 5 | BATSMEN: Samir Kochhar 31(13), Raja Bherwani 3(4) | Riteish Deshmukh fails to read Aditya Ojha’s delivery and is trapped leg-before. The decision was taken to the third umpire, who took his time and finally decided in the bowler’s favour. Raja Bherwani is the new man at the crease. Samir is still batting at a brisk pace and it is imperative for the Dabanggs to pick his wicket or else he may soon take the match  away from them. The ambience here at Sector 16 cricket ground at Chandigarh is pretty awesome. The public is very excited, there is music and a lot of fancy things happening here. OUT! Riteish Deshmukh lbw Aditya Ojha 7(13)

Live Cricket Score: Mumbai Heroes 35/0 | Overs 3 | BATSMEN: Samir Kochhar 26(11), Riteish Deshmukh 6(7) | Samir is pelting most of the balls hard and far. He is batting at a strike rate of above 200 at the moment. Riteish on the other end is mostly trying to rotate the strike. Good strategy, one batter going for the kill and the other giving him maximum strike. Yadav has been handed the ball. Can he draw first blood for the Dabanggs?

Live Cricket Score: Mumbai Heroes 14/0 | Over 1 | BATSMEN: Samir Kochhar 14(6), Riteish Deshmukh 0(0) | Skipper Manoj Tiwari opens the bowling for Bhojpuri Dabanggs. Samir Kochhar is at strike.  He pulls a ball over the 15-yard circle towards the mid-on region for a boundary.  He picks a couple next delivery. Good batting. He hits tow more fours. Three shots to the fence in the first over. Great start for Mumbai Heroes.

There are eight teams participating in CCL 2016. Apart from Mumbai Heroes and Bhojpuri Dabanggs other teams that are playing in the 2016 season are Bengal Tigers and Punjab de Sher, who are at third and fourth position in Group A. Talking of Group B, Telugu Warriors, Karnataka Bulldozers, Kerala Strikers and Chennai Rhinos are currently at first, second, third and fourth positions respectively. This is the sixth season of CCL. The first season took place in 2011 where four teams participated.

CCL has happened every year from then on without a break. Chennai won the inaugural season by beating Karnataka Bulldozers. They went on to win the second season as well. Karnataka Bulldozers won the third and fourth seasons while Telugu Warriors won the last year’s fifth season. Thus, both Mumbai Heroes and Bhojpuri Dabanggs are yet to win a CCL tournament. Can they do it in the sixth season? So far they have performed pretty well. Let’s see who comes out good today. 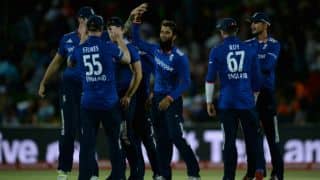