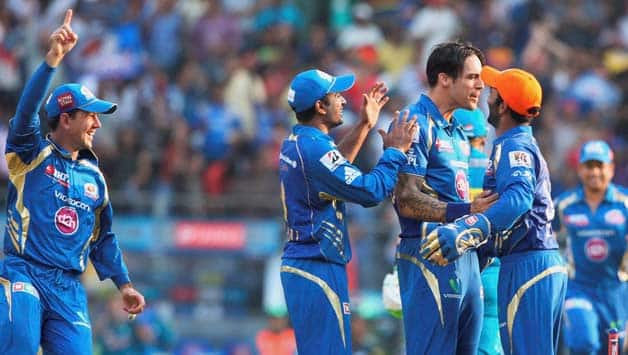 “I think our opening partnership got us to a good start.

Then DK [Dinesh Karthik] and Rohit [Sharma] put on a good partnership. Rohit kept going and obviously got us a good total to bowl to. That gave us the confidence to go out there and pitch the ball up and get those early wickets,” Johnson said at the post-match press conference.

“It was nice to see the ball swing around. You normally see it in these conditions with the white ball, a bit of early swing, so [we were] looking to pitch the ball up. It was nice to get those early wickets because it definitely put them under pressure,” he said.

“We started well with a good partnership, we slowed down a bit [but] we got another partnership going. We know we can score at the back-end of the innings, so the boys did exceptionally well. Two games at home and two wins so it’s a good start to the season,” he added.

The Australian further said that he enjoyed bowling at the Wankhede Stadium as the wicket was quite similar to what he was used to playing back at home at Gabba.

“That is the beauty of cricket — you come up with different conditions all the time and you have got to adapt to it. I am looking forward to the next venues,” the left-arm bowler said.

Mumbai Indians have three away games now and Johnson said they need to be focused on the task ahead.

“We have got a few games away, so we need to keep our focus and keep going. It’s a long tournament so we have got to keep working hard to put good wins on the board,” he said.

“We have got to keep our focus. You have got to enjoy your wins but move forward and play the next games. That is how we are going. It’s going to be a tough couple of weeks with our away games. We have got the confidence, we just have to keep doing our skills,” he added.