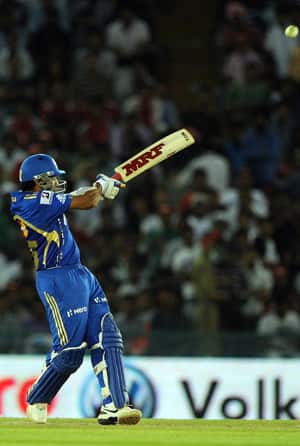 Ambati Rayudu (34) and Robin Peterson (16) creamed leg-spinner Piyush Chawla for 27 runs in the penultimate over to snatch a stunning four-wicket victory from the jaws of defeat against Kings XI Punjab (KXIP) in an Indian Premier League (IPL) match on Wednesday.

Mumbai were in a precarious position after 18 overs, as they needed 32 from the last 12 balls but some incredible hitting by Peterson and Rayudu helped the visitors chase the 169-run target with one ball to spare.

Riding on the heroics of David Hussey’s 40-ball 68 and his undefeated 89-run partnership with David Miller (34 off just 17 balls) for the third wicket had helpd Punjab put up a competitve 168 for three after electing to bat.

Peterson smacked a hapless Chawla for two fours and a six in first three balls of the 19th over and then Rayudu hoicked the leg-spinner for two sixes off the last two balls to change the complexion of the game.

The platform for the victory, though was set by Rohit Sharma, who hit a blistering 50 off just 30 balls.

Rohit had provided the Mumbai-chase much needed impetus with his inspiring knock, containing three sixes and as many as fours but his dismissal off Parvinder Awana tilted the game in the favour of the hosts.

Mumbai needed 36 off 17 balls when Rohit was caught at backward point by Azhar Mahmood. Awana removed rival skippper Harbhajan Singh two balls later, loading the dice heavily in favour of his side.

However, Rayudu and Peterson took it on themselves and stole an unlikely victory with tremendous hitting. (PTI)

IPL 2012: Rain delays the start of RCB-CSK match at Bangalore