Royal Challengers Bangalore selection of both Dirk Nannes and Chris Gayle in the same team in the recently-concluded Champions League T20 has irked many Indian Premier League (IPL) franchises. 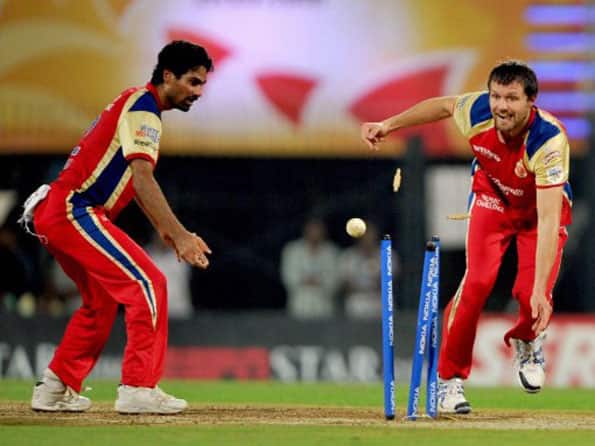 Royal Challengers Bangalore selection of both Dirk Nannes and Chris Gayle in the same team in the recently-concluded Champions League T20 has irked many Indian Premier League (IPL) franchises.

IPL rules suggest if a player was replaced for the whole season, he cannot return till the end of the season. It implies that Nannes, who has replaced Gayle in the team, was injured, and thus could not have played along with the star batsman. But Nannes did return to play.

According to a report in TOI, the angry franchises are planning to complain to the IPL governing council and also want it to make the rules for team selection clear.

Some IPL franchises also allege that RCB had exceeded the total purse of $9 million on player salary. As per the squad details circulated by BCCI on March 11, RCB had spent $8,944,348. Subsequently, Gayle (base price $400,000) replaced Nannes but now with both players featuring in the squad in the Champions League, it effectively means that RCB were spending $9,344,348, more than the cap.

IPL Chairman Rajeev Shukla tried to play down the matter by saying that the decision was taken by the IPL technical committee.”CL T20 comprises of a learned Technical Committee that considers the law of the game and the amendments. There were a lot of cases (along with Gayle’s appeal) presented to the Technical Committee. A final decision on the matter was framed through the discretion of the members of the committee,” said Shukla.

IPL franchise Kolkata Knight Riders (KKR) on the other hand feel that Mumbai Indians have been handed unfair advantage by being allowed to play five foreign players, considering one of their injured players, Suryakumar Yadav, scored 188 in a local game a day after being declared unfit by MI.

“It’s difficult to comprehend how a player is deemed unfit to play in CLT20 but is fit enough score a big hundred in local cricket. A few franchises may be taking the rules a bit too lightly and are being allowed to get away with this,” a team owner complained.

Harbhajan Singh wears his heart on his sleeve: Aiden Blizzard