Mumbai Indians skipper Rohit Sharma won the toss and elected to field against the Highveld Lions in the Group A match in Jaipur. Rohit also said that they are playing the same team from the previous game. 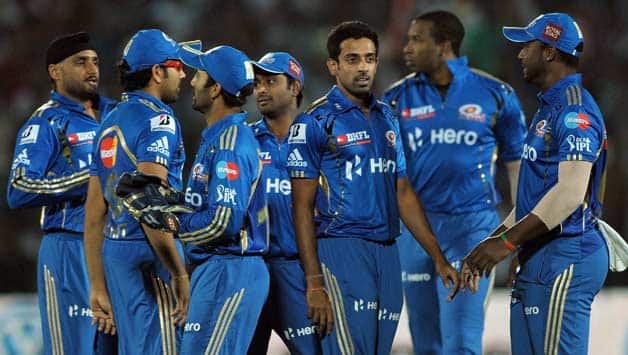 Its all over! Mumbai have got their first win of the tournament! Rohit Sharma will be happy man! Just when Mumbai Indians looked like they would make heavy weather of this chase, Dwayne Smith dug in and stayed patient till he could free his arms and play his shots to take the game away from the Lions. The Lions will be gutted. There were multiple moments in the game when they would have believed they could pull this off. Their campaign is virtually over here. Mumbai just about keep thmselves alive.

Pollard has come alive. He picks up two more sixes and brings down the equation to five runs required from the last two overs.

Is this the turning point? 16 valuable runs from the over! Pollard gets a six and a four off the final two balls. The asking rate is down to just over six runs an over. Mumbai need just 20 to win from 18 deliveries.

Tanvir comes back into the attack. He starts from around the wicket to Pollard. He only has four runs to give away.

A good move to bring in spinner Imran Tahir into the attack. He finishes with figures of one for 23. Just three runs from it.

44 runs required to win from 36 deliveries.

Pretorius strikes! After a heated face-to-face altercation with Viljoen in the previous over, Rohit seems to have lost his focus. He hits the ball straight down the throat of the fielder at deep midwicket.

Tahir comes in and is taken apart. Smith is keeping his side in the game. Two consecutive boundaries. 11 runs from the over.

An expensive over here! 11 runs from it. A boundary from Smith and Rohit to get the game going. Mumbai need 65 from the last nine overs.

Eight runs from Tahir’s second over. Smith is carrying Mumbai Indians here. He gets a four from the over.

Aaron Phangiso comes in and concedes nine runs from his first over. Skipper Rohit Sharma slams a boundary. Ten runs from the over.

Imran Tahir comes in and picks up the wicket of Dinesh Karthik. Lions have pulled it back after the costly over there. Just two runs and a wicket.

Smith slams two sixes in the Tsotsobe’s over. 16 runs from taken from it. Mumbai need more of these.

Viljoen continues and concedees only one runs. Mumbai are making heavy weather of this chase here. They’ve done that before on numerous occasions. They only have 29 runs in the powerplay overs.

Another tight over. Just four runs from it. Mumbai are moving along cautiously after Tendulkar’s wicket.

Hardus Viljoen comes into the attack and is hit for a six by Karthik. Just eight runs from the over.

Sohail Tanvir knocks Sachin Tendulkar’s wicket! What a variation in pace! The crowd cannot believe their eyes. Tendulkar has to walk back. Eight runs and a wicket from the over.

Tendulkar seems to have a plan here. He waits on the back foot while facing the first ball from Lonwabo Tsotsobe, in a bid to play a shot through the off-side. He hits it straight to fielder. A couple of balls later he goes across to guide a ball from outside the off-stump behind square. He is in some mood here. He goes on his backfoot again and clears the infield for a couple of runs.

So the wicket still has life in it! Sohail Tanvir starts off with a lovely delivery that shapes away from the Dwayne Smith. Tanvir continues to slant the ball away from the right hander, this time to Sachin Tendulkar. Tendulkar gets off the mark off the last delivery. Two runs from the over.

Highveld Lions finish on . Lovely final over from Coulter-Nile. He mixes it up well to give only seven runs away. Rohit Sharma will be happy with this effort. Now the focus will be on the star-studded Mumbai Indians’ batting line-up. Can they go past the total? Join us in a few minutes to find out.

Pollard comes into the attack and runs up away from the crease to beat Petersen comprehensively. Pretorius just about picks up the slow delivery and pulls it to the square leg boundary. A single off the next ball brings up the 50-run partnership between these two. It has taken them just 33 deliveries. 12 runs from the over.

Petersen starts off Dhawan’s over with a boundary and gets another off the second last delivery. Dhawan’s spell comes to an end with figures of one for 21. 14 dot balls in his spell.

Johnson comes back and bowls a good over. Just six runs from it.

Pretorius hits a biggie! The Southpaw slams a 103-metre long six, the longest of the tournament so far. It also happens to be the 100th six of the tournament. Petersen scored one off the final ball of the over. Good over for the Lions here.

Coulter-Nile is brought back. The Lions still can’t find a way to cut loose. Only six runs from the over.

Ojha strikes again! It has come off an ordinary delivery! Tanvir takes the aerial route but hits it straight to Dwayne Smith at deep midwicket.

Petersen picks up a boundary in Harbhajan’s last over. The turbanator finishes with figures of one for 20.

Symes goes the McKenzie way! He hits a big six of Pragyan Ojha but is cleaned up of the very next delivery. Symes is not happy with Ojha’s reaction but it won’t matter. The left-hand batsman will have to walk back. Mumbai are clawing their way back here.

Rishi Dhawan continues and is hit for a cracking six by McKenzie over midwicket. Dhawan, however has the last laugh as he bowled a length delivery that nipped back in after pitching on the seam. That ball sent the leg stump cartwheeling.

McKenzie gets into the act. He plays a cheeky delicate reverse dab to guide a length delivery from Harbhajan to the third man boundary. Eight runs are taken from the over.

Another quiet over as the batsmen collect just three singles from it. The wicket of de Kock has clearly impacted the Lions.

Looking at the way the wicket is behaving, it is surprising to see Rohit Sharma remember the fact that he has spinners in his side. He brings Harbhajan Singh into the attack. And he repays the faith to pick up the wicket of de Kock with a doosra. Just two runs come from the over.

What a pitch this is turning out to be! Wasim Akram in the commentary box has gone ahead and compared it to the Perth wicket, which is probably the Mecca for aspiring speedsters. Rishi Dhawan starts off with a brilliant maiden over. He troubles de Kock with his varying line and length and gives nothing away.

And the first wicket! Mitchell Johnson has struck. The extra pace and bounce off the wicket has worked in Johnson’s favour. He bowls a short delivery which van der Dussen looks to pull but cannot clear the square leg fielder. De Kock however continues to time the ball to perfection. He collects a boundary down the leg side. 15 runs and a wicket from the over.

Coulter-Nile continues and is hit for a couple of wonderful boundaries by de Kock. The wicketkeeper-batsman first flicked one through mid-wicket and then played it on the other side of Ojha at mid-wicket to collect eight more runs from the over. The timing was perfect on both the strokes.

Finally a move on for the Lions! van der Dussen collects two glorious boundaries off Johnson’s second over to shrug off the early struggle. Eight runs from the over.

Action continued after a brief hault due to the power failure. Nathan Coulter-Nile began from the other end and had a solid start thanks to the little tinges of green on the wicket. On the third ball, he bowled a beatiful delivery that squared up de Kock. This is a wonderful wicket. The Lions will be tested.

Mitchell Johnson opens the attack and straight away generating 140-plus kmph. The blue jersey adds spring in his shoes. After four good balls, he strays down the leg side with a short delivery which goes way above wicketkeeper Dinesh Karthik’s reach. That’s four wides. And the power is gone! Wonder what that delivery did to one of the towers of the floodlights. The players will have to wait for another 10-15 minutes.

Mumbai Indians skipper Rohit Sharma won the toss and elected to field against the Highveld Lions in the Group A match in Jaipur. Rohit also said that they are playing the same team from the previous game.

Good evening and a warm welcome to CricketCountry’s live coverage of the Champions League Twenty20 Group A match between Mumbai Indians and Highveld Lions in Jaipur. The pink city has flocked to the stadium in hope of seeing a Sachin Tendulkar special. To be fair, the maestro did look in fine nick for the short period he lasted in the opening game against the Rajasthan Royals.

I am Prakash Govindasreenivasan and I’ll be bringing you over-by-over updates of this match. A lot will be at stake in this fixture with Mumbai and the Lions on the third and fourth spot in the table, with only Net Run Rate separating the two sides. These are also two sides that are yet to open their account in the tournament.

You can watch the preview here