Patil stays in Virar and at times, has to miss the matches as he has to help his father at their farm

While it was not an international game, Makarand Patil, a Mumbai-based youngster, bettered Yuvraj Singh, Herschelle Gibbs, Ravi Shastri, Garry Sobers, Hazratullah Zazai and Ross Whiteley as he hit seven sixes in a row, including six sixes in an over.

The 23-year-old Viva Supermarkets salesman achieved this feat at the Sachin Tendulkar Gymkhana in Mumbai during the F division Times Shield tournament game. Patil came out to bat at number 8 and went on to hit 84 runs off 26 balls. His blitz powered his team Viva Supermarkets clinch the title, beating Mahindra Logistics. (ALSO READ: Hazratullah Zazai’s six sixes and the other five to achieve the feat)

Patil, who stays in Virar and at times, has to miss the matches as he has to help his father at their farm, said that It s a great feeling to be like a star for one day .

Till I hit the fourth six, I didn t think that I will score six sixes in that over. My teammates kept cheering, I could hear the loud noise when I hit the sixth six. I was over the moon. And later when I faced the seventh ball, I hit that too for a six. It s a great feeling to be like a star for one day, Patil told The Indian Express.

People are still coming to meet me. They are greeting me. The feeling is good but life ahead will not be easy again. I will have to work harder than before. My first aim is to get in reckoning for the Mumbai team in future, concluded Patil. 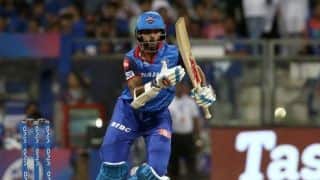 Delhi opt to bat against unchanged Chennai; Amit Mishra in for Trent Boult