Deccan Chargers coach Darren Lehmann on Thursday said Ishant Sharma is their find of the ongoing IPL season, and that the paceman along with Munaf Patel are capable of taking forward Indian cricket. 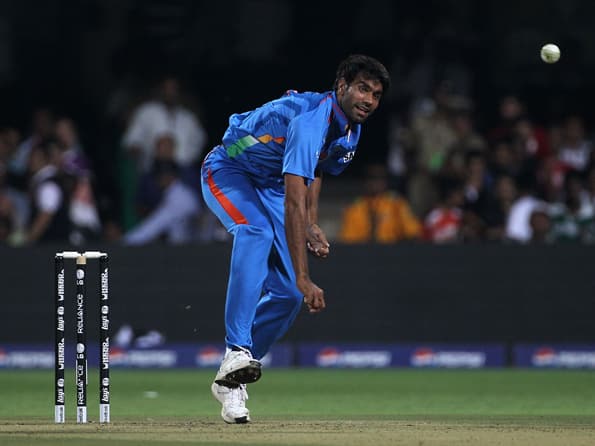 Lehmann said Munaf is more consistent with his length and line, more so than anything else Getty Images

Deccan Chargers coach Darren Lehmann on Thursday said Ishant Sharma is their find of the ongoing IPL season, and that the paceman along with Munaf Patel are capable of taking forward Indian cricket.

“He’s been the real find for us this year. To have him and (Dale) Styen to start the bowling has been great for us,” said the 41-year-old former Australian cricketer ahead of Saturday’s clash against Mumbai Indians.

Lehmann said Ishant, who did not figure in the victorious Indian World Cup team, had problems of overstepping initially, but once that problem was solved, he has made steady progress.

“He had issues, early in the tournament, with no balls. We sorted that out and he’s bowling beautiful length and with good pace. He trains as hard as anyone. I have not seen a fast bowler, train and recover so well. His preparation is second to none,” he said in praise of Ishant.

“If he is not in the Indian team, then I am a poor selector. He’s been unbelievable this year,” Lehmann added about Ishant who flattened Kochi Tuskers Kerala in the latter’s backyard with incisive figures of five for 12.

Lehmann was also impressed with another India pacer Munaf Patel who plays for rivals Mumbai Indians. “He’s bowled very well in the World Cup. I think he’s more consistent with his length and line, more so than anything else. I think he and Ishant are the two bowlers who will take Indian bowling a long way,” said the Aussie who also praised the overall strength of the Indian squad.

“India has a very good squad and that’s what makes a successful team for a long period of time,” he remarked.

Talking about the Chargers’ poor display in IPL-4 that has pushed them to the bottom of the table, Lehmann said the team had talented players but could not click as a unit.

“It’s been frustrating for sure. We have not been far off from playing pretty good cricket. We lost six games, which actually we should have won. We have lost by ten runs, missed here and there and dropped a couple of catches. We have lost the big moments,” he said.

“We have a good batch of overseas players and some good local kids. I don’t think they (batsmen and bowlers) have clicked together. When they have we have won games comfortably,” he added.

Lehmann said captain Kumar Sangakkara, their key batsman and highest run scorer, would play on Saturday and on Monday against another bottom-ranked team Pune Warriors before leaving for home and departing for England with the Sri Lanka squad for the full international series.

“He will play the next match against Pune and then go to Sri Lanka for the tour of England,” the Chargers coach said.

Asked why South African Juan ‘Rusty’ Theron had not been given a chance to play, Lehmann said with Steyn present there was no opportunity to include him till now. “We have the best fast bowler (Steyn) in the world. It’s pretty hard for Theron to knock off Steyn. He will probably play two of the last three games. It all depends on match-ups,” he explained.

Lehmann conceded the team had not played well enough at home after having broken the jinx of not winning at the Rajiv Gandhi stadium in Uppal in earlier editions.

“That’s a jinx, is it not? Probably it’s quite interesting that we just had flat wickets when we had the best fast bowlers. We might have thought that we would have got better tracks. We did not play well enough at home,” he commented.

Lehmann said this year’s IPL has been the most open of all editions with the increased field. “That’s the nature of the game 20-20, anyone can beat anyone on a day. That’s the best thing about the IPL this year. No one goes into a game thinking they are going to win.

“The guys found it enjoyable actually. Ten teams is always tough, but I have enjoyed this fun. I have enjoyed every IPL. It’s four now, it’s getting better and bigger.”

It would be a sight for Gods to see this fantasy XI of West Indian greats in action!