A maiden five-wicket haul in Twenty20 cricket for Munaf Patel, courtesy some stunning outfield catching from an electric Kieron Pollard, derailed what was shaping to be a threating Kings XI Punjab innings. 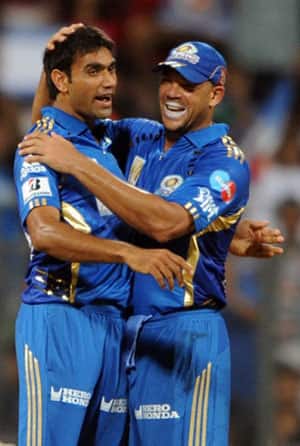 A maiden five-wicket haul in Twenty20 cricket for Munaf Patel, courtesy some stunning outfield catching from an electric Kieron Pollard, derailed what was shaping to be a threating Kings XI Punjab innings. The home side had recovered ground strongly after an early blow, but a double-wicket 16th over, bowled by Munaf , snatched the thrust back from Shaun Marsh made the difference between a big target and an attainable one. KXIP s total of 163, however, was aided significantly by a generous 22 extras.

Yet again Paul Valtathy failed, picking out Aiden Blizzard at long-on for a run-a-ball 14 off Munaf in the fourth over. Adam Gilchrist was cracked on the helmet Lasith Malinga and then let off by his former Australia team-mate Andrew Symonds at short extra cover, and proceeded to play a few firm shots as he and Marsh added 70 in just seven overs. However, Gilchrist was unable to really build on the life he had been given. Malinga snared him immediately into his second spell with another short delivery that Gilchrist gloved to Ambati Rayudu.

By this time Marsh had cruised to 30 with an array of strokes. His driving was a treat to watch, and Marsh made sure to pick runs off the part-time spin of Rohit Sharma and Tirumalasetti Suman with horizontal-bat shots. He looked to come down the track to the slower bowlers and didn t allow any bowler to settle.

Dinesh Karthik came out played his most attractive innings of the competition. Malinga was punched straight for four, Pollard drive past cover and, after being reprieved by Blizzard in the deep, Karthik collected boundaries off the ineffective Suman.

Whatever momentum KXIP had achieved through Marsh s efforts, came apart in the space of a couple deliveries immediately after the second strategic timeout. A brilliant boundary catch by Kieron Pollard robbed Marsh of a half-century, and three balls later David Hussey drove an easy catch to Blizzard at mid-off. Suddenly Munaf had figures of 3-0-14-3 and MI were right back in control.

An 18-run over, courtesy consecutive sixes by Mandeep Singh, was followed by Munaf snaring two wickets in his final over. The fifth wicket came with another athletic catch by Pollard who gave the crowd value for their money. The final five overs of KXIP s innings produced six wickets and just 39, telling a story of Mumbai dominance.

Teams have no choice in selecting the pitch: BCCI