With little security and no arrangement from the CAB, many even went inside the stadium.

The Cricket Association of Bengal (CAB)’s mismanagement again came to the fore as irate Bengal fans heckled Railways skipper Murali Kartik and speedster Anureet Singh taking chance of lack of security arrangements on the third day of the ill-tempered Ranji quarter-final between Railways and Bengal.

After an allegation of “ball-tampering” against the duo on day three of their match, irate fans on Friday targeted the duo as they mobbed them hurling choicest of expletives just outside the Eden Gardens main gate.

With little security and no arrangement from the CAB, many even went inside the stadium and near the dressing room and came within touching distance of the players.

Such was the mayhem that the Railways players were denied the mandatory media interaction and the duo could have been easily hurt by the angry fans.

“You people have already made me villain, making me in the eye of storm. I’m not going to say anything,” the veteran India spinner said.

“I’ve played here for three seasons and this is what I expect from them. Let them shout. I’m not going to say anything,” he said referring to his Kolkata Knight Riders stint.

In fact all this happened in front of CAB president Jagmohan Dalmiya who pleaded not to exaggerate the matter.

“Please don’t exaggerate it, we will see to the matter and do whatever necessary is required,” Dalmiya said.

Provoked by the fans hurling abuses, the Railways pacer Anureet even lost his cool as he went up to a fan but before it could go out of control the handful of policemen put them into a car as they could not board the team bus.

Kartik was in the centre of another controversy after there were allegations of “ball tampering” during Bengal’s second innings as the Railways skipper was warned and the ball was changed in the 15th over.

Soon fans kept on shouting ‘Go back Kartik’ from the upper tier of the club house as abuses flew thick and fast.

The fans were all the more furious because it was Kartik who had ‘Mankaded’ Bengal batsman Sandipan Das in a ill-tempered league stage encounter in New Delhi last month. 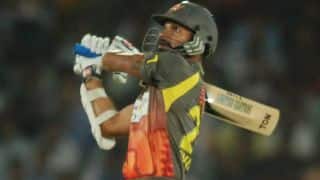 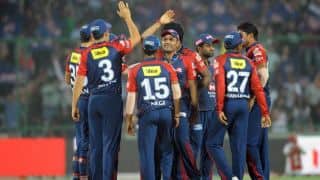 IPL 7: Delhi Daredevils proceed to auctions without any retentions