Match referee said he has received a report from umpires, who changed the ball.

Veteran spinner and Railways captain Murali Kartik was embroiled in a controversy once again after he was warned by the umpires for some “issues” with the ball in an acrimonious Day Three of their Ranji Trophy quarter-final match against Bengal.

Match referee Rajendra Jadeja said that he has received a report from the umpires who changed the ball after warning Kartik.

“Yes I’ve received a report from the umpires who thought there were some issues with the ball and they warned the bowling team captain [Kartik] and the ball was changed,” Jadeja said.

“If such an incident further occurs then it would be case of ball tampering,” Jadeja, of the Saurashtra CA, said.

“The ball tampering comes in the Level 2.9 offence and as we cannot say who has done it, it’s the captain who is imposed a fine in the range of 50 to 100 per cent of the match fee,” he added.

A decision on whether to ban a player is taken by the Board’s disciplinary committee, Jadeja said.

Bengal team manager Debabrata Das said his side noticed the incident just after lunch when Abhimanyu Easwaran was castled by Anureet Singh for a golden duck in the fifth over by a “reverse swing”.

Levelling ball tampering charges against Kartik and pacer Anureet Singh, he said, “The ball started reversing from the fourth over which was just impossible. They were pricking the ball and coach Ashok Malhotra and I complained this to the Match Referee.”

He further said umpire Suresh Shastri at the High Court end warned Kartik and changed the ball at the drinks break in the second session when Bengal were 15/2 in 14 overs.

Just a month after both the teams were engaged in an ill-tempered match, triggered by a ‘Mankading’ incident by Kartik at league stage in New Delhi, Bengal and Railways renewed their bitter rivalry here once again.

Kartik was apparently involved in a heated exchange with Ashok Dinda and his Bengal counterpart Laxmi Ratan Shukla after hitting a six against Sourav Sarkar this morning.

Dinda wiped the tail en route to his 6/105 to give Bengal a three-run first innings lead and in reply Railways had the hosts in trouble at 7/2 in the eighth over.

Now it was the Railways turn to give it back with Subhomoy Das and Sudip Chatterjee at the receiving end.

It all started when umpire Shastri ruled out a close caught behind appeal of Subhomoy in the ninth over as Anureet bowled five maiden overs on the trot.

In each of his delivery, Singh ran up to the batsman and exchanged something, while Kartik was too giving a back up from the slip.

Kartik was seen vigorously rubbing the ball on back side of left thigh and apparently shouting something to the batsmen. There was a delay for more than five minutes as both the umpires summoned Kartik to warn against some “issues” with the ball.

Such was the panic among the Bengal batsmen that Subhomoy chose to chase down a dead ball that slipped out of Ranjit Mali’s hand and went into the slip cordon.

Looking to hit over the covers, the poor Shubhomoy only made a mockery of the scene by slipping and falling in the field as Bengal moved at snail’s pace with 15/2 in 14 overs at the drinks break and the ball was changed.

Shouting slogans of ‘go back Kartik’, fans hurled choicest of expletives against the former India left-arm spinner who had earned the ‘villain’s’ tag after he ‘Mankaded’ Sandipan during their league match in New Delhi last month.

Such was the acrimony; Bengal players refused the customary handshake against the Railmen who secured three points by virtue of a first innings lead in the league match.

Meanwhile, Bengal’s Writtick Chatterjee was fined 10 per cent of his match fee for showing dissent on being given out caught behind on during Bengal’s first innings yesterday.

Match referee Jadeja judged it as a Grade 1 offence as the batsman stood his ground even after the umpire raised his finger. Sourav Ganguly: Reason behind his aggressive celebrations in 2002 Natwest final 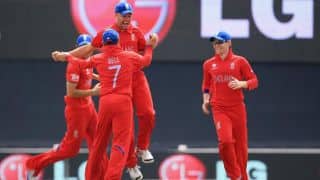 England look to start afresh in ODI series against Australia